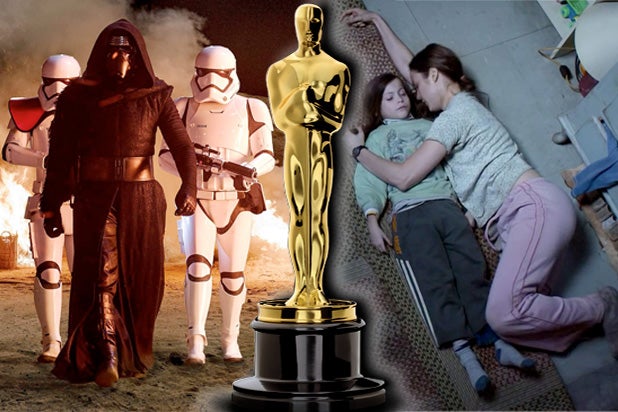 Do you get how the Oscars-box office nexus works now?

An Academy Award can help a movie at the box office, but the converse is definitely not true, and Thursday’s nominations prove it.

Here are 5 signs that Oscar voters don’t read the Monday-morning trades as much as everyone else in Hollywood.

1. J.J. Abrams‘ blockbuster “Star Wars: The Force Awakens,” the top-grossing film in U.S. history, doesn’t get a Best Picture nomination. A24’s “Room,” which has made about $5 million and has yet to play in 200 theaters, does.

2. Only one of last year’s 10 top-grossing movies made the Best Picture list: “The Martian,” which came in at No. 8 at the box office for the year with $227 million.

3. Actors in hit movies fare don’t fare any better with the Academy, it seems. Although “The Martian” star Matt Damon secured a Best Actor nod, the top-grossing film to produce a nominee in either of the actress categories was 2015’s No. 55 grosser, the Jennifer Lawrence dramedy “Joy,” which has earned just $48 million.

4. Last year, Universal Pictures had the highest domestic, foreign and worldwide box office totals that any studio has ever had. But the studio mustered just four nominations: two for the actors in “Steve Jobs,” one for the screenplay for “Straight Outta Compton” and one for the song from “Fifty Shades of Grey.” The studio’s biggest hits — “Jurassic World,” “Furious 7” and “Minions” — were completely shut out, even in the technical and animated feature categories.

5. Even Warner Bros., which had a notable slump at the box office in 2015, still managed to secure 11 nominations, including 10 for “Mad Max: Fury Road.”