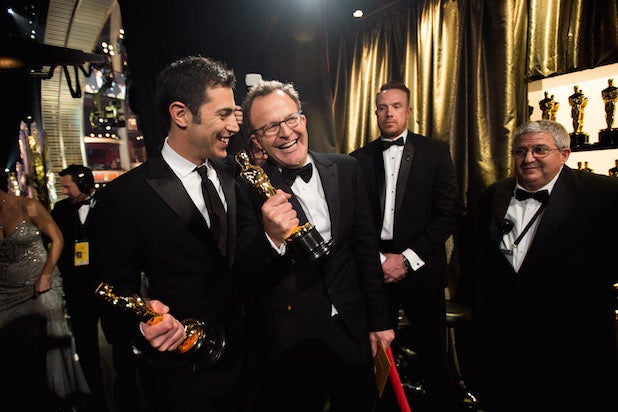 Accepting congratulations on the symmetry, McCarthy grinned. “That’s how we roll,” he said. “It’s cleaner that way.”

But what enabled “Spotlight” to roll that way?

Going into Oscar night, McCarthy’s film was in what seemed to be a tight three-film race with “The Revenant” and “The Big Short” — but in the estimation of many Oscar-watchers, including me, “Spotlight” occupied the No. 3 spot in that trio.

In the days leading up to the ceremony, I’d heard increasing buzz about how “Spotlight,” not “The Big Short,” might actually be the film that could take down the favored “The Revenant” — and a few colleagues changed their predictions at the last minute to reflect that growing sentiment. But the win still came as a surprise, albeit one that should teach us a few lessons:

1. It’s fine if voters love you, but it’s essential that they like you.
If there’s a single reason for the “Spotlight” victory, it’s probably this: It was the most universally acceptable of the frontrunners. And the preferential system of counting votes, which works to find a consensus favorite by looking at the No. 2 choices and No. 3 on ballots of films that are eliminated, is designed to find and reward the universally acceptable.

This was typical of the conversations I had with voters afterwards:

Me: “But out of ‘Spotlight,’ ‘The Big Short’ and ‘The Revenant,’ which did you rank highest on your ballot?”

“The Revenant” was a passion pick, but it was also a divisive film that no doubt wound up near the bottom of many ballots. “The Big Short” was probably less divisive, but it too may have been a bit more polarizing. And so “Spotlight” turned out to be the perfect consensus film for a system that demands consensus.

2. Small-and-serious beats big-and-bold.
In recent years, the Oscars have seen several showdowns between big, dazzling movies and small, serious ones. “Avatar” and “The Hurt Locker” were the frontrunners in 2009, “Gravity” and “12 Years a Slave” in 2013, “The Revenant” and “Spotlight” (and “The Big Short”) this year.

3. The Producers Guild is not infallible.
The biggest thing that “The Big Short” had in its favor this awards season, and the reason it was the consensus second choice to “The Revenant” in the view of most pundits, was that it had won the Producers Guild of America Award. The only guild that also uses the preferential system to count its ballots, the PGA had a perfect record since the Best Picture category expanded, with no movie winning Best Picture without first winning the guild award.

(The closest thing to an exception came two years ago, when “Gravity” and “12 Years a Slave” tied at the PGA, and the latter film won the Oscar.)

And “Spotlight” probably won the Oscar for the same reason that “The Big Short” won the PGA: because it picked up lots of No. 2 and No. 3 votes from the ballots of films that were eliminated as the count went on.

So why the difference, for the first time, between the guild and the Academy?

Maybe “The Big Short” had lost some of its momentum by the time the Academy voted. Maybe the 7,000 PGA voters are fundamentally different from the 6,000 Oscar voters in ways that make a film like “Spotlight” more valuable to them.

We don’t know the reason, but we do know the lesson: The PGA is reliable, but it isn’t infallible.

4. Best Picture/Best Director splits are the new normal.
Over the nine-decade history of the Oscars, the film that wins Best Director has gone on to win Best Picture almost 75 percent of the time. But when the Best Picture category expanded in 2009, and the preferential system was brought in to count the ballots in the newly super-sized category, I speculated in print that the move might lead to more picture/director splits — with the two categories counted using different systems, I wrote, they might more often go to different films.

That didn’t happen for the first three years of the new system, with “The Hurt Locker,” “The King’s Speech” and “The Artist” winning both awards. But in the four years since then, picture and director have split three times: Ang Lee won for directing “Life of Pi” while “Argo” won Best Picture, Alfonso Cuaron won for directing “Gravity” while “12 Years a Slave” won for Best Picture, and now Alejandro G. Inarritu has won for “The Revenant” while “Spotlight” won Best Picture.

One takeaway might be that nonwhite directors don’t win both awards, though that’d probably be unfair. (And not entirely true: Inarritu won both last year for “Birdman.”) A truer one is that voters have become increasingly receptive to ticking different boxes for two categories that used to go hand-in-hand; they seem to factor in degree-of-difficulty more when they vote for director than they do when they vote for picture.

5. The days of the juggernaut Best Picture winner are fading.
It used to be that a Best Picture winner would also win lots of other Oscars. Even if big winners like “Titanic,” “Ben-Hur” and “The Lord of the Rings: The Return of the King” were anomalies with their 11-Oscar hauls on the big night, Best Picture winners in past decades typically took home a handful of awards to go with the main trophy.

But while the two-win total for “Spotlight” is the smallest since “The Greatest Show on Earth” 63 years ago, a small haul is now almost routine. This marks the fourth year in a row that the Best Picture winner had fewer than five wins on Oscar night, and the fifth time in the last six years. (The exception, “The Artist,” only had five.)

In the current decade, though, Best Picture winners have averaged a paltry 3.5 wins. The average hasn’t been been that low since the 1930s, when the Oscars had far fewer categories than they do now.

That’s the new paradigm: You can win a lot of Oscars (hello, “Mad Max: Fury Road”), but that doesn’t mean you’ll take home the big one. And the pundits among us who reflexively look for other Oscar wins to gauge a Best Picture contender’s worthiness might want to stop doing that, because it doesn’t matter the way it once did.

21 Best and Worst Oscars Moments of 2016, From Sarah Silverman to Lady Gaga (Photos)

WORST: The introduction clip for the show -- you know, the one that sets the tone for the show and gets viewers into the mood -- started with a cheesy clip of all the ingredients that go into an Oscar, like heart, passion and inspiration. And just so viewers get the idea, the ingredients were then funneled into the Oscar statutes in pixie-dust form.