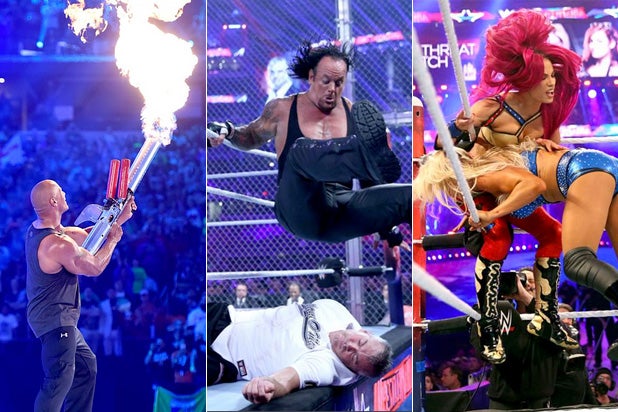 WrestleMania 32 tore through Dallas, Texas, on Sunday and the pay-per-view event did not disappoint.

As TheWrap previously reported from just outside the ring in Dallas Cowboys’ AT&T Stadium, The Rock returned to remind WWE fans he’s still the most electrifying man in sports entertainment.

Here are five of the most exciting moments from the wrestling spectacular that attracted a record 101,763 fans.

Be careful issuing challenges at @WrestleMania! You NEVER KNOW who will answer!! @RealMickFoley @SteveAustinBSR #HBK https://t.co/kkQsEtT4XZ

Fans were jazzed to see WWE legends Mick Foley and Shawn Michaels walk out to answer The League of Nations, but roared in approval when the Texas Rattlesnake appeared, as well. Watch the toughest SOB in WWE history drop his devastating Stone Cold Stunner on Xavier Woods below.

The retired NBA champion displayed some Shaq Fu when he helped The Big Show choke-slam another giant competitor, Kane, into the mat. Moments like this are what Vine was made for.

Yes, the non-wrestler gave one of the best performances of the night when he battled The Undertaker in a Hell in a Cell match that concluded with the son of WWE CEO Vince McMahon attempting an elbow drop from 20 feet in the air. It backfired, of course, as Shane’s opponent rolled out of the way in the last second — but that jump took some serious testicular fortitude.

Sasha Banks, Becky Lynch and Charlotte proved they’re just as daring as the guys while duking it out for the redesigned women’s championship belt. Watch Charlotte execute a perfect moonsault above, and Banks dive off the top rope to break up a submission hold below.

Dwayne Johnson, an eight-time winner of the WWE Championship belt, returned to WrestleMania and lit up the arena — literally, taking a flamethrower to a sign reading “The Rock.”

“The Rock is back in Dallas … the Rock is back on WrestleMania,” declared the actor, on a break from shooting Paramount’s “Baywatch” reboot. Then he teamed with another wrestler-turned-actor, John Cena, to take down Bray Wyatt and his bearded brothers.