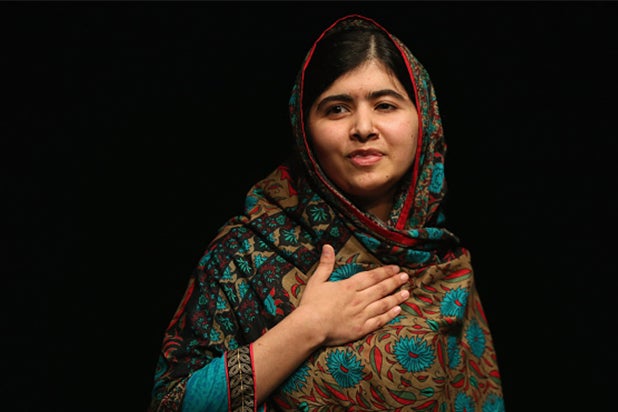 After news broke Friday morning that Malala Yousafzai was one of two recipients to receive the 2014 Nobel Peace Price, almost exactly two years after the Taliban shot the now 17-year-old Pakistani on her way to school for her outspokenness in urging young girls to go to school and get an education, the young activist’s journey has come full circle in terms of being embraced by Western media.

Malala’s name is not new to anyone who plays close attention to news in the U.S. Her memoir, “I Am Malala,” brought her tremendous notoriety in the West. She appeared in the fall of 2013 on several popular television programs including most notably “The Daily With Jon Stewart” and in a sit-down interview with Diane Sawyer on “20/20,” which made her a household name.

The other recipient of this year’s Nobel Peace Price was Kailash Satyarthi, 60, of India, who gave up his career as an electrical engineer to work tirelessly to rid his country of child slavery. Yousafzai and Satyarthi will split the $1.1 million prize.

After being nominated for the Nobel Peace Prize for the second year in a row, here’s why TheWrap believes that Malala’s message of peace continues to spread through U.S. media circles:

She’s Humble
Malala isn’t exactly one to brag about her exploits. Her mission comes from the most honest of places, and she has never sought fame for fame’s sake.

Case in point, back in July ABC News’s Amy Robach travelled to Nigeria to interview her for “Good Morning America,” where she was campaigning on her birthday for girls’ right in the troubled African country and to promote the #BringBackOurGirls initiative against Boko Haram.

She told Robach at the time that she “didn’t deserve to win” the Nobel Peace Prize — which, of course, is exactly why she did.

“I have started a campaign,” she continued. “And it’s not over yet… it’s not completed yet. When I see that I have done something and I have achieved this big goal, which I always have dreamed for… then I’ll think, ‘Now I deserve it.'”

2) She has a sense of humor
Malala’s breakthrough moment in popularizing her message in the U.S. was her interview with Jon Stewart last October.

In addition to her extreme articulateness and poise seated across from the awe-induced late night host, Malala impressed Stewart with her quick wit and her ability to smile in the aftermath of turmoil.

“It is an honor for us, I know me,’ Stewart began. “This is, by the way, we talked a little bit before the show, and nothing feels better than making you laugh. I will say that, I enjoyed that very much.”

3) She stands up to President Obama
When Malala stopped by the White House last fall to meet with President Obama, she wasn’t there just to play nice.

“I expressed my concerns that drone attacks are fueling terrorism,” she told the U.S. commander-in-chief. “Innocent victims are killed in these acts and it leads to resentment amongst the Pakistani people. If we refocus efforts on education, it will make a big impact.”

If there’s one thing that Hollywood admires, it’s a straight shooter, and Malala is certainly that. We didn’t hear about Gwyneth Paltrow exactly challenging Obama on any issues Thursday night at the fundraiser at her L.A. home… albeit, we’re still not sure where Obama stands on Goop.

4) She’s a real-life Katniss Everdeen
Sometimes art imitates life and vice-versa, but Malala is a real-life heroine of greater proportions than anything that could be conjured up by Hollywood.

Like the lead character from “The Hunger Games” series, Malala is a symbol of hope against an oppressive regime. Unlike the character played by Jennifer Lawrence on the big screen, she is not a reluctant hero.

Malala’s story has become something much larger than just the very important cause of education for girls — it’s come to symbolize the struggle in Pakistan to fight radical Islam.

The debate over leading roles for women continues to dominate the conversation in Hollywood. Meanwhile, Malala is proof that gender is never an issue when it comes to amazing heroes.

5) She doesn’t care what her critics think of her
Malala has had her fair share of critics in her home country. She’s been accused of being a distraction from the U.S.’s complicity in Pakistan’s complicated political quagmire and of playing too much as a Western secular symbol of “white savior complex.”

However, she hasn’t wavered in the core of her message — that young girls deserve a chance.

“My father says that education is neither Eastern or Western. Education is education: it’s the right of everyone,” she said in response to critics, spoken on message like the most seasoned of Hollywood publicists.

Malala is a young woman wise beyond her years — this we’ve known for quite some time. And with the validating message coming from the Nobel committee, expect to hear much more from her in U.S. media circles for many years to come.