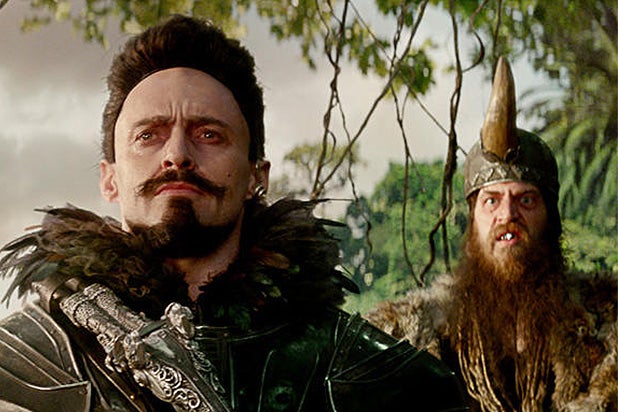 Profitability looks like Neverland for Warner Bros.’ big-budget family film “Pan,” which bombed domestically with just over $15 million in its debut this weekend, roughly one-tenth of its $150 million production budget.

Compounding the bad news Sunday were soft overseas numbers for “Pan” — $20 million from 52 markets, or 40 percent of its foreign run. That makes it clear the film’s overseas haul is not going to offset the domestic shortfall and over-sized budget of the PG-rated origin tale directed by Joe Wright and starring Hugh Jackman, Garrett Hedlund and Amanda Seyfried.

“Pan” was originally conceived as a tentpole with franchise potential by the studio and its backers RatPac-Dune Entertainment and Berlanti Productions. But the fact that the studio in April shifted it from a July release date to the fall was not a sign of confidence.

Their assessment was correct, but “Pan” wasn’t able to compete much better in the fall than it would have in summer and here are five reasons why:

Also Read: 'Pan' Peters Out, 'The Walk' Wobbles as 'The Martian' Repeats at Box Office

Low-Wattage Starpower
Jackman might be star-enough to drive an established Marvel franchise like “X-Men” at the box office, but “Pan” was a tougher sell. Neither Jackman, nor Hedlund, Seyfried or newcomer Levi Miller could get fans excited enough to see this latest movie about the boy who wouldn’t grow up.

Whacked by Drac Pack
Even in its third week, Sony Animation’s “Hotel Transylvania 2” was significant competition and took second place at the box office with $20 million, after “The Martian’s” $37 million win. Sony timed its release cleverly, so its Halloween theme would play well as the holiday grew closer.

The $15 million that “Pan” took in wasn’t far from the $18 million that another fall family film — Disney’s “Alexander and the Terrible, Horrible, No Good, Very Bad Day” — did last year, but that one cost $28 million.

Bad Buzz Blitz
The reviews weren’t good. The film has a dismal 23 positive on Rotten Tomatoes. It was also besieged with bad buzz after it rolled out Thursday night. This was an illustration of how buzz that formerly took days to be felt at the box office is now having an effect within hours thanks to social media. When the media piled on, including the New York Post which said, “Joyless ‘Pan’ Should Walk the Plank,” and TheWrap’s Alonso Duralde described it as “shrill,” the negativity snowballed and Saturday’s hoped-for family bump never materialized.

Casting Controversy
All publicity is not necessarily good publicity. Many moviegoers first got wind of “Pan” last year when the casting of Rooney Mara as Tiger Lily drew fire. The character had been depicted as Native American in both the original J.M. Barrie novel and the classic 1953 Disney cartoon. At least the casting of Cara Delevingne as a mermaid flew under the radar.

We’re Not Talking “Power Rangers”
The concept may have been flawed from the outset. The classic J.M. Barrie’s tale doesn’t resonate like it once did with youngsters, and it’s not like the world was clamoring for another Peter Pan movie. To make it a prequel, and to up the ante with a massive budget, in hindsight, seems ill-advised. “Pan” has been granted a China release later this month, but how high can hopes go, since the character is largely unknown behind the Great Wall. Disney faced a similar challenge with “Oz The Great and Powerful,” which topped out at $25 million there.