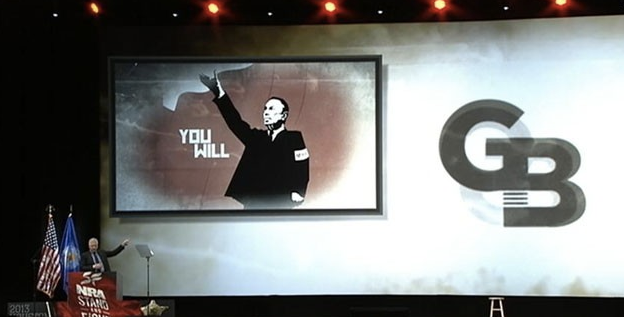 Glenn Beck is accused of likening New York City Mayor Michael Bloomberg (who is Jewish) to a Nazi at an NRA event, but it's only the latest case of what "The Daily Show" once called Beck's "Nazi Tourette's."

The conservative commentator has a long record of comparing Nazis with people who — to put it lightly — aren't. He is willfully dumb about history, or thinks his fans are. At best, he's a hilariously clumsy propagandist.

First, let's take a moment to consider how off-the-scale hellish the Holocaust was, because it's easy to forget in a time when we casually throw around phrases like "grammar Nazi." The Holocaust, by the most conservative estimates, included Germany's state-led murder of 6 million Jews. The Nazis also murdered millions of people whose crimes included being gay, mentally ill, or Polish.

Since the numbers may be too large to wrap our heads around, survivors have strived to give us visuals to understand how atrocious the Holocaust was. Here's the most effective I've ever seen: The Auschwitz concentration camp in Poland has an entire room full of artificial limbs that belonged to Jews who were murdered there. Many of them got those artificial limbs by fighting for Germany in the first World War. Two decades later, their country killed them. (Auschwitz also has rooms full of luggage, shoes, and other items to drive home the scale of the horror.)

Why am I telling you something so awful? So you'll comprehend how innaccurate Glenn Beck was when he compared Nazis to the following things:

1. A mean flight attendant: In September, Glenn Beck said a flight attendant offended by his conservative beliefs refused to make eye contact with him, barked the word "breakfast," and slammed a soda down on his tray. He said he was made to feel "subhuman" and noted that the flight attendant was Israeli, wondering "if he had any friends and family in the dark years of Europe that made them feel less productive. I wonder if his friends and family ever felt like they were less than a welcome member of society because of their faith or who they were or what they believed."

Beck also wondered what the flight attendant would do if he and his friends were in power, and whether they might force Beck to march through the streets wearing a sign mocking him. Beck didn't make the comparison explicitly, but that was one thing Nazis did to Jews in Germany as Hitler rose to power.

4. The Peace Corps: Also in 2009, Beck said Obama's plan to expand the Peace Corps was "what Hitler did with the SS." 5. Mike Bloomberg. Speaking at an NRA convention Saturday, Beck showed an image of Bloomberg giving what appeared to be a Nazi salute. Jewish groups were appropriately appalled. A source close to Beck told ABC News the image was actually comparing Bloomberg to Vladimir Lenin, and Beck said Jewish groups owed him an apology. It's true that it appears possible the Bloomberg image was superimposed over a shot of Lenin. But in the original Lenin image (left), Lenin doesn't have a Nazi-like armband. (We could go into how many Russians died fighting Nazis, but you get the point already.)

Beck has said that he used one of "the worst analogies of all time" when he compared Reform Judaism to radical Islam. That's pretty bad, true. But I'm going to go ahead and call the mean flight attendant-Nazi analogy his personal worst.