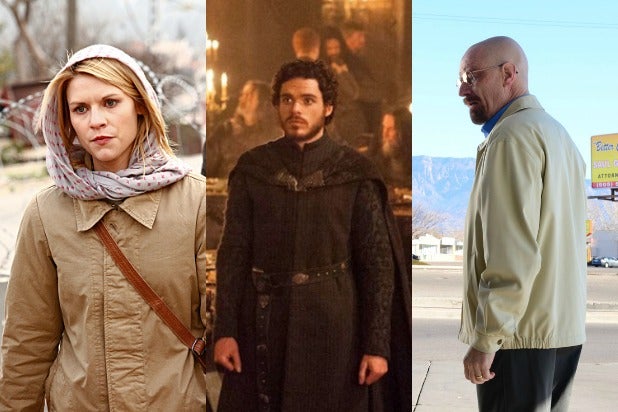 Remember when you could watch TV to relax? Good luck with that now. Aside from a few steady sitcoms, scripted TV is a land of sudden death, missing friends, and risky, anonymous sex. Sitting down to watch your favorite show can be agony.

And, also, more fun than ever.

Some of TV’s longest-standing rules are over, done in by groundbreaking shows like “The Sopranos,” “Breaking Bad,” and “Game of Thrones.” This coming season, “Homeland” does one of the oddest things we’ve seen. By not showing us something.

1. No Promiscuous Female Leads: Remember when male characters spent their nights philandering as their wives and girlfriends looked sadly out the window? Why should the men have all the fun and fear of VD? Today’s heroines are aggressive about casual sex. “Homeland” protagonist Carrie Mathison thinks nothing of picking up a stranger at a bar. “The Bridge” lead Sonya Cross doesn’t even order a drink at the bar before dragging a guy home. She has no clue why he’s interested in unnecessary stuff like cuddling and exchanging names. ABC’s upcoming “Betrayal” features a woman carrying on an affair like a real Don Draper – except that she’s more guilty about it, since it’s a network show after all.

2. Lead Characters Can’t Die: When “Game of Thrones” decapitated Ned Stark, it did in an old TV rule as well. Other shows have killed prominent characters – “Dexter” said goodbye to Rita, and “The Sopranos” to Chris-tu-fah – but “Thrones” killed off the guy at the center of everything. Oh, then it killed off his family. Message: Don’t get too attached to anyone.

3. Lead Characters Have to Actually, Like, Be on the Show: Says who? A very prominent “Homeland” character is absent for the first two episodes of the upcoming third season. You know what? The show still works okay. Not that we’re encouraging “Homeland” to be the latest to kill off a lead. “Boardwalk Empire” is also having fun with our expectations: After spending the summer hyping the arrival of Jeffrey Wright as Dr. Valentin Narcisse, the show didn’t find room for him in its Season 4 premiere. He’ll appear next week. We think.

4. Save the Cat: The late Blake Snyder earned well-deserved attention for his “Save the Cat” screenwriting manual, which advised, among other things, that the hero do something nice early in the story to win viewers’ sympathy. He could save a cat for example. Well. Netflix’s “House of Cards” starts with our anti-hero killing a dog. (To put it out of its misery, but still.) Expect more dogs and cats to die as Hollywood embraces ever darker lead characters. AMC’s “Low Winter Sun,” for example, begins with our hero committing a murder. Of course, with “Breaking Bad” lead Walter White going very far to the dark side, it may be time for a shift back to heroes who are heroes. Good luck, cats.

5. Give the People What They Want: “I think philosophically, in general, it’s good to not give people – this is going to sound like a joke and it’s not – it’s very often dramatically good to not give the audience what they want,” said “Breaking Bad” creator Vince Gilligan on the show’s podcast last week. “To make them wait for it. I mean what’s more fun? Christmas Day, or the night before Christmas? I always thought the night before Christmas was more fun, because then it’s like all possibilities are on the table.”