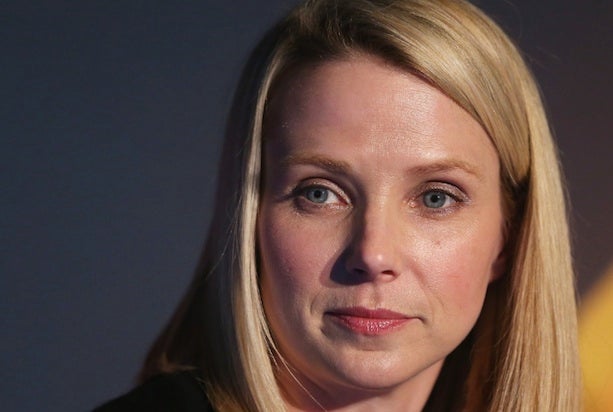 Yahoo CEO Marissa Mayer answered her critics on Tuesday when she addressed the major issues surrounding the aging tech giant.

The executive had a lot riding on Tuesday’s earnings report after coming under fire from investors for Yahoo’s lackluster performance during her two-year tenure.

“One quarter does not a year make,” Mayer said. Still, she boasted that the 1 percent revenue growth year-over-year was helped by her leadership and investments in mobile, social, native and video. The company beat expectations with earnings of 52 cents per share on $1.09 billion in revenue in the third quarter.

Hot topics on the earnings call included Alibaba, mergers and mobile. Here’s how the head of the tech company answered her critics.

Mayer is the future of Yahoo
Mayer needed to sell herself as the person to Yahoo’s transition from outdated brand to leading tech giant. She was recently challenged by hedge fund Starboard Value, which criticized her for spending too much money without increasing company performance. Many feel that the company hasn’t yet found a brand identity and is making too many acquisitions without clear direction.

Mayer tried to convince analysts that she has the vision to lead Yahoo into the future.

Also read: Marissa Mayer on Yahoo Earnings: ‘We Are Not Satisfied’

“We have great confidence in the strength of our business and the opportunities within,” she said. She reiterated her core philosophy of “people, products, traffic, revenue.”

Shareholders are a high priority
A big concern for investors is what the future holds now that Yahoo has sold much of its stake in Chinese e-commerce company Alibaba after its IPO. A major achievement in the quarter was the $6.3 billion Yahoo saw from the sale of Alibaba shares, higher than analysts expected.

Mayer stated that the company will return more than $3 billion of its Alibaba returns to shareholders. The CEO placed some of the blame for the deal structure that ate up a significant portion of the sale in taxes on the previous leadership.

“In May 2012, prior to the current management’s arrival at Yahoo, myself included, Yahoo entered into an agreement with Alibaba regarding the sale of our shares,” Mayer explained. “Upon the current management’s arrival in Q3 of 2012, we immediately recognized two things: Alibaba had the potential to appreciate considerably in value. And also that we needed to improve the relationship between the two companies.”

“I immediately directed my team to begin healing a year of tension and hard feelings,” she said. As a result, she noted, Alibaba allowed Yahoo to reduce the number of shares it had to sell in the IPO.

The company still has shares worth $34 billion (pre-tax) locked up with Alibaba for another year.

“We have the best tax experts in the country working on structures to maximize the the value to our shareholders,” Mayer said.

Mayer’s acquisitions are strategic and necessary
Investors have expressed concern over the return on several mergers and acquisitions Mayer has initiated during her Yahoo tenure.

“Our recent acquisitions have been instrumental and will eventually outpace declining legacy revenues,” Mayer said, defending her policies noting that the company’s technology is “quite aged.” She went on to point out that Tumblr and Flurry made up 80 percent of the money she spent on acquisitions, and that Tumblr will generate more than $100 million in revenue in 2015.

This was the first time the company had broken out mobile advertising revenue, reporting $200 million in revenue in the third quarter. Mayer expects gross mobile revenues for the full year to exceed $1.2 billion.

Mayer was optimistic about the long-term growth potential in the category.

“Mobile remains the minority of our traffic,” she said.

Mayer will continue to look for ways to reduce costs
The company has been under increased pressure to reduce costs. Yahoo has already started by closing offices and reducing head count.

“We have closed eight offices to date,” she said. “We have moved, reallocated and reassessed hundreds of roles.”

“We’ve also taken a more rigorous approach to performance,” Mayer said. “To date, we’ve had nearly 2,000 performance-related departures from the company during my tenure.”