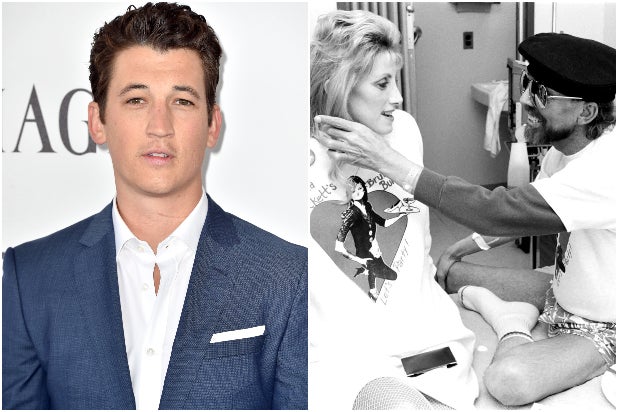 Actor Miles Teller’s uncle Brian has been a quadriplegic since he was a teenager, going in and out of nursing facilities and dealing with numerous caretakers over the years, something Teller says has always been a challenge.

But after seeing the new AIDS documentary “5B” — which depicts the hospital wing in San Francisco that was the first to care for AIDS patients at the height of the crisis — Teller said he was moved by the film and now hopes for better care and attention from nurses in all parts of healthcare.

“I know firsthand how it goes in there and how much bureaucracy is involved, and also when he has good nurses and good caretakers how much higher his quality of life is,” Teller told TheWrap. “And when he was in bad facilities, when he was getting bad treatment, when he’s been neglected, it’s been terrible for him. My mom actually drove him from New Jersey all the way down to Florida to get him into a better facility, and his quality of life just went up so much.”

“5B,” directed by Dan Krauss and Paul Haggis, looks back on the all-volunteer nursing staff at San Francisco General Hospital, which during the height of the HIV/AIDS crisis in the early 1980s was the first to establish a wing to house patients when fear was so rampant about the disease that no others would.

With no cure and no clear idea for how the disease was even spread, the caregivers in 5B used unorthodox methods — displaying physical and emotional affection for patients, even allowing pets and same-sex loved ones into the hospital room or throwing parties for the patients in the ward — despite the incredible transmission risks and the patients’ almost certain death rate in the early days.

For instance, many doctors and nurses wore elaborate, protective “space suits” in the fear that even simple contact could transmit the disease. One volunteer nurse recalls a mother saying around her newborn, “Don’t let George breathe on the baby.” But 5B was far more intimate and loving for patients, and one nurse in the film described 5B as an environment that was “a wonderful place where you can go die. But it doesn’t take away from the fact that they died.”

Teller is serving as an ambassador for the non-profit (RED) in support of the documentary, one of several actors including Halle Berry and Julianne Moore also advocating on behalf of the film. He found a personal connection to the nurses’ dedication to their patients. But he also stressed that “5B” resonates today in how it examines the persecution of the unknown and how important it is on an individual level to show compassion for other human beings.

“Anytime you’re dehumanizing someone for anything, but especially if it’s a condition they have, anything that makes them different, if that should lead to any form of persecution, ostracizing, alienating, not making them feel like their life matters, then I think that’s f—ed up,” Teller said. “This movie does a great job showing in the microcosm about how we can all be a little better towards our fellow men and women.”

Guy Vandenberg was one of the volunteer nurses who helped patients in 5B, and his husband Steve Williams was one of the patients there and a survivor of the disease. Both are featured in the documentary and spoke to TheWrap about how much it meant that the nurses put in the effort and took the risks that they did.

“We do what we can,” Vandenberg said. “Not being together, not doing what you can, is actually diminishing to us as well. Helping people and restoring their dignity is one of the most powerful and uplifting things for both parties.”

“That’s the reason why I’m here right now,” Williams said. “People need people. You were able to see the connection that the nurses and the patients at San Francisco General and the patients had together. It was amazing.”

Teller says he got the chance to speak with both patients and nurses featured in “5B” when the film played in Cannes, and he let them know how much their individual contributions mattered to both him, his uncle and the rest of his family.

“I know how important those individuals are. Because it’s not just the entire facility. You could be at the same facility as someone and not have as good of a nurse,” Teller said. “So when he’s with good people, they become family to us. They become people that we invite to our home for holidays, because we’re so thankful and appreciative of the care and the work that they’re giving him.”

“5B” opens Friday in theaters and will support (RED)’s fight to end AIDS, with 30% of “5B’s” net proceeds going to support the work of the Global Fund – the recipient of all (RED) monies.