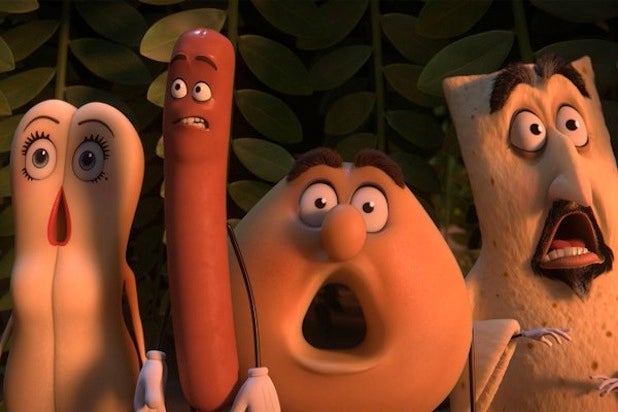 Who knew an R-rated animated comedy could be so good at the box office?

Columbia and Annapurna’s “Sausage Party,” distributed by Sony, launched hot off the grill with $33.6 million.

Made on a relatively modest production budget of $19 million, the opening of the movie featuring Seth Rogen as a talking hot dog, is undoubtedly off to a great start.

Part of the film’s success is due in part to some behind-the-scenes teamwork, said Rory Bruer, president of worldwide distribution at Sony. “What the filmmakers brought really inspired the marketing team to do things really different — just like the film itself,” he told TheWrap on Sunday.

Here’s a breakdown on why it resonated with audiences:

1. It’s one of a few original concepts.
Opening during a season of slumping sequels, reboots, remakes and lackluster superhero movies, “Sausage Party” did well in spite of — or perhaps because of — its ridiculous premise that has living, talking and breathing supermarket food items attempting to unravel the reason of their existence. It stood out against the pack because it is simply different than anything out right now.

2. Fans who saw it early liked it.
A screening at the South by Southwest festival in Austin, Texas, got audiences aglow with positive chatter. A few months later at San Diego Comic-Con another screening was received really well by moviegoers there.

Also Read: New 'Rogue One: A Star Wars Story' Trailer Was Great, But I'm Still Worried About the Movie (Commentary)

3. A very popular trailer.
The trailer was viewed more than 182 million times when it dropped, marking the biggest red-band trailer launch in Sony history. To date it has been viewed 224 million times.

4. Sizzling reviews.
Critics liked it, too. The film started last week with a super-high 93 percent Rotten Tomatoes score, which settled into a still-glowing 83 percent. Its Metacritic rating, which is a weighted score, was also a solid 67.

5. Timing was key.
With just days left until college students have to get back to campus for fall semester, Sony timed the release of “Sausage Party” to catch the attention of young adults before they got too preoccupied.

6. Seth Rogen got creative with marketing.
As Bruer indicated above, Rogen and filmmakers made the extra effort to provide Sony’s marketing team with creative inspiration. One piece of the movie’s successful marketing puzzle came a week ahead of the movie’s release date, when Rogen was featured in a video with a talking cantaloupe. A partnership with Buzzfeed also proved fruitful, in which Rogen narrated original food recipe videos — just to name a few examples. Indeed, a huge percentage of the movie’s marketing budget was spent on online promotion — approximately four times more than the 12 percent that’s usually allocated.