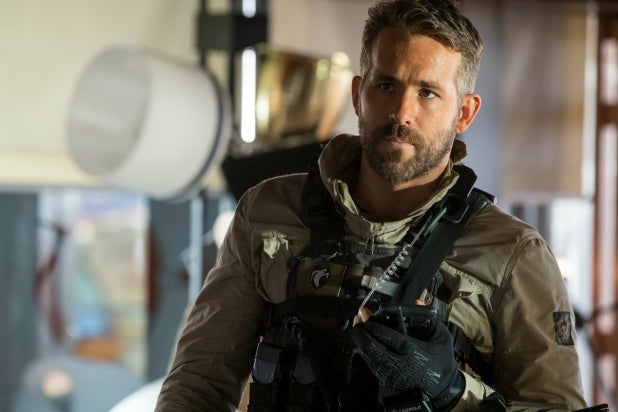 The biggest difference between Bay’s globe-spanning adventure and the Vin Diesel-Dwayne Johnson car-racing movies, which have increasingly aped the “Ocean’s Eleven” franchise, is that Bay’s gang of superficially inclusive do-gooder mercenaries (they want to depose an evil, Middle Eastern dictator!) are more vocally cynical.

Led by “One” (Ryan Reynolds), a disillusioned tech billionaire who refers to his teammates by numbers instead of names, Bay’s group spends a lot of time talking about how little they care about anything but their humanitarian mission until eventually they realize that they do care — for each other. That generic theme is mostly annoying since Bay’s usual focus on spectacular violence is generally at odds with his characters’ ostensible values.

Then again, it wouldn’t be a Michael Bay movie if he didn’t slavishly cater to the lowest common denominator (get ready for some sexist and gay-panic jokes!), so it makes sense that Bay’s antiheroes are more obnoxious when they’re trying to be good than when they’re knowingly bad.

And “knowingly” is the key word in that last sentence: only the explosions, gore and lingerie in the movie feel authentic to Bay’s oft-copied style, especially after the it’s belabored, eye-roll-inducing set-up: through a series of exhausting flashbacks, One introduces us to his crack team of juvenile killers, each one more jaded and disgruntled than the last. Five (Corey Hawkins, “BlacKkKlansman”), a sniper looking for redemption after a mission goes wrong, is ironically the least sympathetic of the bunch since he’s the one that credited writers Rhett Reese and Paul Wernick (“Deadpool 2”) try hardest to get viewers to like. Five repeatedly asks One to stop looking at his group as a means to an end, and start looking at them as a “family,” a phrase that gets thrown around a lot in the “Fast & Furious” movies.

But it’s hard to buy what Five is selling given how indistinct his teammates are. Three (Manuel Garcia-Rulfo, “Widows”), a dimwitted but efficient hitman, seems to want to impress his dementia-addled mom, but that plot point isn’t touched upon beyond one barely-related joke later on. And fellow teammates Two (Mélanie Laurent), a French killer and former CIA agent, and Six (Ben Hardy, “Bohemian Rhapsody”), a British parkour expert, don’t add much beyond some European accents and a few more warm bodies for Bay to throw around.

More to that point: a reflexively cruel death that occurs early on in the movie suggests that Bay doesn’t really care who dies as long as they expire after some car explosions, tired banter, canned sexual tension, and a lot of wide-angle landscape photography of international cities like Florence, Las Vegas and Hong Kong. Throw in some mediocre, bass-heavy pop songs, including a hilariously bad techno cover of “Carmina Burana,” and some Shrek-worthy pop culture references that also serve as punchlines (really, an “8 Mile” joke?), and you’ve got “6 Underground,” a movie that’s about as fresh as Y2K and El Niño jokes.

That hole where the movie should be is something of a problem given that “6 Underground”‘s characters either coyly buy or struggle with their self-image as rebels with a conscience. Bay seemed to be moving away from these types of characters with “Pain & Gain,” his equally glib, but generally superior 2013 true crime meathead auto-critique.

But “6 Underground” feels like Bay’s vain attempt at getting his boorish mojo back now that helming more “Transformers” sequels doesn’t seem to interest him anymore. Which itself would be interesting if everything in “6 Underground” wasn’t so tiresome. The explosions are, in fact, good and big, and the gore and gams are more plentiful than in “13 Hours,” Bay’s humorless, and seemingly interminable 2016 Benghazi war thriller.

But “6 Underground” is as tedious as Bay’s last three post-“Pain & Gain” features since it’s an effects-driven story that features way more plot and dialogue than it needs. Who cares about rooting against the evil dictator of Turgistan (Lior Raz from the original version of “The Kindergarten Teacher”), a ruthless despot who likes art, crushes dissent and has an impotent, but fair-minded brother (Payman Maadi, “The Night Of”)?

There’s nothing memorably ruthless about Raz’s villain since Bay generally focuses on One’s mission of getting everybody together for one last set piece. Reynolds’s character also tellingly spends more time generalizing about what Raz’s character symbolizes — a mustache-twirling villain with delusions of grandeur who benefits too much from a lack of international vigilance and oversight — than in distinguishing his nemesis from every other bloodthirsty despot.

Then again, there are several moments in “6 Underground” where Bay seems content either to prop up or knock down his usual fetishes, like when One’s teammates announce their arrival at a swank private party by blasting Lucasfilm’s signature THX stereo sound effect (they even identify it as such). Bay’s latest will find its ideal audience at Best Buy, when it will be used to demonstrate various HD-TVs’ technical specs; Bay seems to know and relish that eventuality.