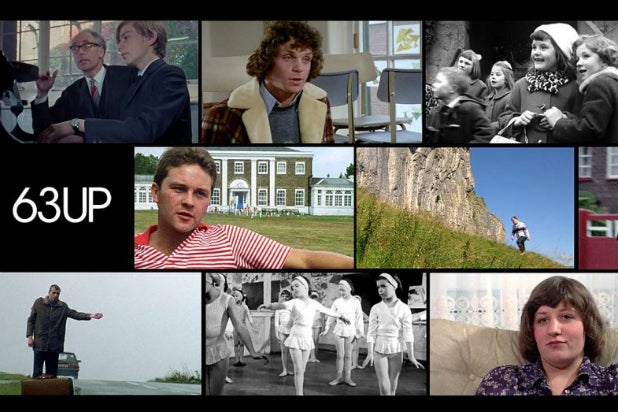 Michael Apted’s “UP” series of British documentaries remains as fascinating and frustrating and beautiful and sad as ever with “63 UP,” bringing 56 years of life, love, growth and heartache to bear since Apted was a researcher on the original installment, 1963’s “7 UP,” and took over as filmmaker from then on.

If you’ve seen the others, it’s hard not to think of this phase as the most reflective and slowed down, with quite a few of the participants surrounded by not just kids but grandkids, whereas they themselves were once running around as the cameras and questions tried to keep up with their ambitions. People are greyer and paunchier and also, for the most part, settled about where things have taken them.

Big life questions may still make these often-reluctant interviewees bristle, but they laugh them off more quickly because they’re used to this process every seven years. If anything, they’re welling up a bit faster at the emotional queries, because loss — usually the death of parents, or the prospect of leaving a loved one behind as old age hits — is now an ever-present reality. One subject is seriously ill and shaken by it, and the series has even experienced its first passing: Librarian Lynn, who died from health complications after an accident. Apted rightly includes her story anyway, checking in with her widowed husband and grown daughters.

Also Read: '56 UP' Review: The Kids Are All Right - If Wrinkled, Heavier and Hurt by the Economy

That emotional layering, of a friendly check-in with people whose lives we’ve come to care about, is how the series has most progressed from its political origins as an experiment in English class mobility under a microscope, picking a bifurcated group of kids at opposite ends of the economic spectrum with the idea — always restated each time out, to us, and as a theory to the participants — that to look at the child is to see the adult. For the most part, that’s seemed true. Maybe Tony’s trajectory is the best refutation of it; where Apted once thought this bulldog East Ender was headed toward criminality and jail, the cabbie and sometime actor got himself to a middle-class life in the countryside.

That Tony gets to tease Apted on camera about the director’s assumptions is one of the ways the built-in prejudices of the series has turned into the occasionally worthy self-critique. That there were only four girls chosen out of fourteen subjects has always been a problem, for instance (one Apted has acknowledged) and once again in “63 UP” we’re reminded of what Jackie thought of Apted’s narrow-minded questioning of her at 21: all about virtue and men, nothing about her views of the world.

What the world has given single-mom Jackie, now, is the fear that her much-needed disability benefits are on tenuous ground. The world does feel different in terms of opportunity. College administrator Sue, the bubbliest of participants, sees her council-estate upbringing — a government program that helped her to build a foundation for financial independence — as the last of its kind with homelessness so rampant. Brexit is now a topic, too, one that the few participants asked about it don’t sound too happy about, however they voted.

Ironically, though, considering Jackie’s disapproval of the series’ sexist origins, it’s not so much the state of the state as every subject’s feelings about family and companionship that have become the films’ emotional superpower, because they get to the heart of the epic scale of an ongoing documentary that covers the ebbs and flows of a whole life. The most touching segment chronicles the lifelong friendship of children’s home survivors Paul and Symon, who never let being a continent apart (Paul moved to Australia as a child) keep them from the occasional reunion with their wives. Hearing them talk about how they’ve processed coming from difficult or broken upbringings, and sought to reconcile that with their own home lives (Symon even becoming a regular foster parent), is lump-in-the-throat stuff.

The real character suspense, however, is saved for Neil, the series’ first dramatically off-track figure when he became homeless in his ’20s, causing moviegoers to fear for his future. Well, Neil is still around, a rural character still struggling with mental illness, and still politically active with his local council work. He’s had emotional ups and downs, but even in his disheveled, on-the-edge state he also represents the part of the series that is most human, this notion that there are things about us that keep us going, even if from the outside we may come across as a less than ideal example of where we hoped to be.

Who knows if we’ll get a “70 UP.” If, for whatever reason, “63 UP” were the last, it would be a perfectly satisfying summing-up of what’s proven to be the surest motive for any of its participants to keep filling us in on their personal lives, issues of class and destiny be damned — they did it because time, love, and just enough fortune allowed it. Neil says it simply, honestly and truest when Apted asks the inevitable question about whether he’s happy: “I’m just happy when something goes right.”