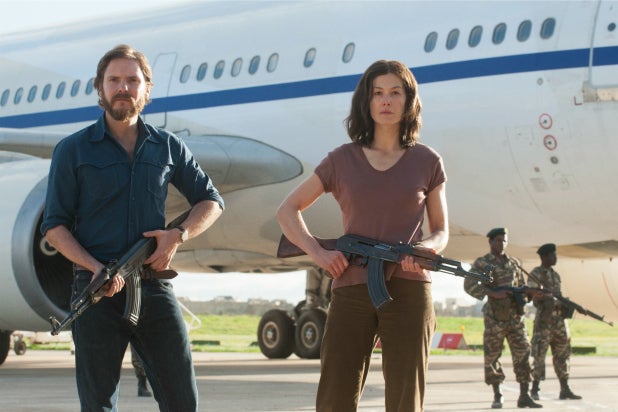 The 1976 hijacking of an Air France flight full of French and Israeli nationals and the one-shot-in-a-million rescue that then ensued has already inspired a documentary, two made-for-TV movies and one Golan-Globus opus. (I particularly recommend the outrageously cast “Victory at Entebbe” — starring Kirk Douglas, Elizabeth Taylor, Burt Lancaster, Richard Dreyfuss and Anthony Hopkins, among many others — but each telling has its own unique appeal).

So with “7 Days in Entebbe,” director José Padilha’s task was simple: Find something new to say about the 1970s most famous air rescue. To that end, he ably succeeds at his goal, even if the project itself never quite soars.

Padilha lets you know that this ain’t your run-of-the-mill geo-thriller right from the start, kicking things off with something rarely found in films of this ilk — a dance sequence. The opening titles set the geo-political stage over choreographer Ohad Naharin’s celebrated modern-dance piece “Minus 16,” a performance the film returns to at several key points, including during its otherwise routine action-film climax.

And that interplay between military raid (no calling spoilers on something that happened nearly 42 years ago!) and modern dance speaks to the larger aim of the film, which tries to stay true to the facts of the story while slightly deflating codes of the genre.

Take the ostensible protagonists: in this case, the hijackers themselves. Actors Daniel Brühl and Rosamund Pike play the real German reactionaries who boarded that fateful flight in July 1976 and, with the help of the Popular Front for the Liberation of Palestine, forcibly rerouted the plane to Uganda. Far from stock bad-guys, these ersatz terrorists are Marxist idealists in over their heads and uncomfortably self-aware. They know full well how it looks to the rest of the world when a pair of Germans take a plane full of Jews hostage, but like everyone else in this tick-tock procedural, they’re stuck playing their part.

While the hijackers and hijackees wilt in the heat of Idi Amin’s (Nonso Anozie, “Zoo”) personal fiefdom, Israel’s doveish PM Yitzhak Rabin (Lior Ashkenazi, “Foxtrot”) and hawkish Minister of Defense Shimon Peres (Eddie Marsan) squabble in the corridors of the Knesset over just what to do. The script by Gregory Burke (“’71”) treats these tense debates with similar nuance, recognizing them for they really are — power struggles in a precarious parliamentary government.

Finally, the third narrative thread, which follows special ops soldier Ziv (Ben Schnetzer, “Goat”) as he trains for the mission, is most notable for what it doesn’t do. That is, by focusing on this composite character instead of the real-life military hero who has best come to be associated with Operation Thunderbolt, “7 Days in Entebbe” reiterates its more sober-minded approach. While Unit Commander Yoni Netanyahu (Angel Bonanni, “Shots Fired”) — yes, Bibi’s brother — does play a role here, he has much less the out-sized influence he’s given in other film versions, or even in the accepted cultural view.

That’s the film’s central goal: taking this culturally ingrained myth and draining it of clear heroes and villains while breathing life into the uncertain day-by-day process. And although interesting on the page, it does result in a slow-burn film that can often feel dramatically inert. Nearly every scene offers some variation on the same set-up, where characters sit around waiting, worrying and smoking.

The ultimate success of “7 Days in Entebbe” varies from scene to scene, and even more from actor to actor. As pill-popping hijacker Brigitte Kuhlmann, Pike convincingly pulls off a good deal of German-language dialogue while conveying her character’s growing descent into drug-fueled mania. On the other hand, as the wily Minister of Defense, Marsan goes to war with the Israeli accent and loses a resounding defeat. That whole narrative leg suffers as a result.

Ultimately, the film doesn’t quite succeed within its own stated goal. “7 Days in Entebbe” wants to offer a somewhat dispassionate view on the whole affair as a geo-political event that encompassed a number of overlapping parties, but it never fully fleshes out the Palestinian hijackers with the same texture as it does the German ones. While Brühl and Pike live rich narrative arcs as their extremist idealism spirals into chaos, their PFLP counterparts only get to represent agents of said chaos.

That isn’t to say that the film should offer a defense for what was an objectively terrorist act, only that the film talks a good game (and even dances up a storm) without ever walking the walk.