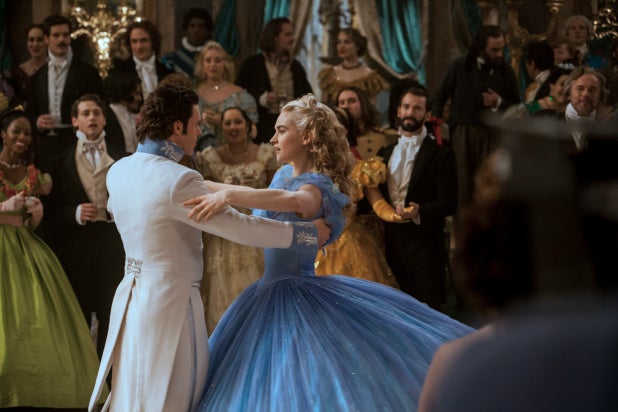 Kenneth Branagh‘s “Cinderella” is an enchanting take on an age-old tale — but don’t let the live-action version fool you, there are plenty of references to it’s animated predecessor.

While Disney’s original was full of music, talking animals and fairy dust, the update winks at its classic in moments that all audiences will appreciate.

Among the Easter eggs found in Friday’s release — which is already slated to dominate the weekend box office — TheWrap spotted the following colorful mentions.

While the cartoon version has a team of bluebirds bathe and dress Cinderella, they’re not entirely missing from the new film. A pair of the winged helpers appear in sweeping shots of Cinderella’s (Lily James) pastoral estate and occasionally on a windowsill.

Gus-Gus
The troublemaking, over-eating brown mouse Gus makes an appearance — and even gets a name-check from James — hoarding his signature stack of cheese.

Fairy Godmother Catchphrase
Again, there’s no music in Branagh’s take on “Cinderella,” but Helena Bonham Carter in the role of fairy godmother manages to eek out a “Bippitty Boppity Boo.” What would the film be without it?

Lucifer
Cate Blanchett is plenty terrifying as Lady Tremaine, her version of the Evil Stepmother with a Bette Davis twist, but she comes armed with the same sidekick as the animated film — a villanous grey cat named Lucifer.

Bells, Bells, Bells
The lyrics didn’t lie — night and day, it’s “Cinderella!” After the death of her father, James’ heroine is forced into servitude and plays maid to her stepmother and stepsisters. In a quick flash, we see the famous service bells clanging off the hook, demanding chores and assistance from the future princess.

It’s inevitably the Lily James show, with some major assistance from Blanchett, but supporting characters do their best to shine. Ridiculously handsome Richard Madden is a perfect prince, but we noticed a better callback to the ‘toon — a king’s servant who issues the royal proclamation about the ball everyone is dying to attend seems molded after the animated versions royal adviser. Pratt falls and flop sweat abound on this poor soul, charged with finding the Prince a royal bride.