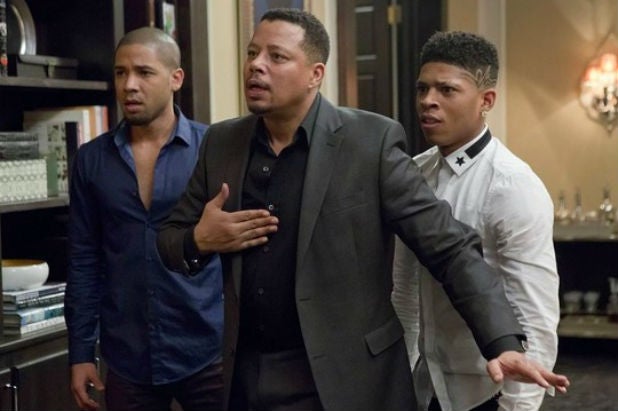 (Spoiler Alert: Please do not read on if you haven’t watched Wednesday’s episode of “Empire.”)

Lee Daniels‘ hip-hop soap opera “Empire” kept the beat of explosive drama going as shocking revelations hit one after another backed up with hard-hitting one-liners.

On Wednesday’s penultimate installment before the two-hour finale on Mar. 18, Lucious Lyon attempted to square away his plans for Empire Entertainment’s IPO while putting his personal affairs in order. But of course, nothing is that easy.

Music therapist Michelle White (Jennifer Hudson) tried to help Andre in his time of need, but Cookie wasn’t about to buy into her mind games. “What is this bipolar disorder?” she asked during a group therapy session with Andre and his wife, Rhonda. “Psychiatry, this musical therapy, that’s white people problems … my baby is strong, he’s a lion.”

2. “I can’t stop thinking about you” (Malcolm to Cookie)

After the sexual tension between Cookie and Malcolm (Derek Luke) had reached a boiling point, Malcolm revealed his feelings to her — and scored a hot kiss.

3. “Your father is a brute” (Camilla to Hakeem)

While seducing younger man Hakeem with both her camera and her sex appeal, fashion designer Camilla (played by supermodel Naomi Campbell) criticized Lucious as she tried to capture his son’s heart. “She has her drawers wrapped around my baby’s neck. He can’t breathe,” protective mother Cookie said later in the episode.

Lucious tried to use his slickest moves to lure back his ex-wife as he offered to reunite Cookie with the Empire she built by marrying her again. But she has Malcolm on her mind, whom she later told: “I’m not wearing any panties.”

5. “I want to know how much it will cost to make you disappear” (Lucious to Camilla)

Not normally known as a doting dad, Lucious claimed to have Hakeem’s best interest at heart when he tried to buy Camilla out of his family’s life. “I want to know how much it will cost to make you disappear,” he said. “I am going to offer you a great deal of money to get as far away from my son as humanly possible,” he told her, before literally getting her deported.

6. “In six months, you’ll be rotting in a wheelchair with a colostomy bag trailing behind you” (Camilla to Lucious)

Undeterred, Camilla delivers a killer line of her own. “In six months, you’ll be rotting in a wheelchair with a colostomy bag trailing behind you,” she told him, before she left on an impromptu flight for London.

As if Lucious didn’t have enough children to deal with, it’s finally revealed that he is the father of Olivia’s (Raven-Symoné, playing Jamal’s ex-wife) daughter, Lola, but it takes sketchy Reg pulling a gun out to make him publicly admit it in front of the family. “I’m the father,” he said.

8. “You don’t care about nothing but yourself — everything you touch you destroy” (Cookie to Lucious)

Following his candid confession, Lucious asked Cookie to be his wife again: “We built this together.” But she’s having none of it, having gotten over her “stupid fantasy of getting back together” after she got out of prison.

“You don’t care about nothing but yourself — everything you touch you destroy,” she told him. “You just don’t want to die alone.”