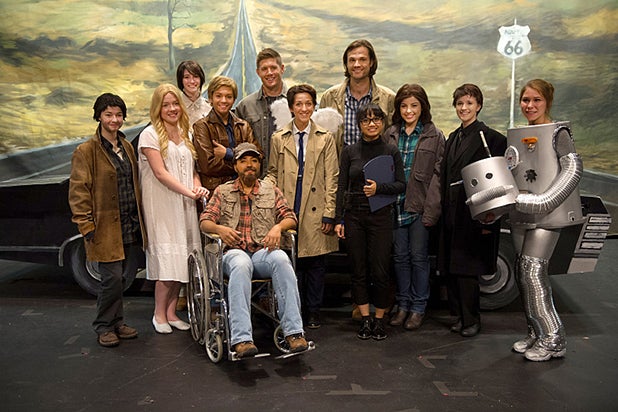 “Supernatural” airs its 200th episode on Tuesday night, an amazing feat for the long-running CW drama about two brothers who spend their free time tracking down murderous demons.

TheWrap caught up with the show’s stars and showrunners at the 200th episode wrap party in October at the Fairmont Pacific Rim Hotel in Vancouver, where they explained the keys to “Supernatural’s” success — strong writing, great chemistry between leads Sam (Jared Padalecki) and Dean Winchester (Jensen Ackles), and incredibly passionate fans.

“Lightning struck. It was a situation where we could’ve been canceled nine times,” Padalecki told TheWrap. “If the show that premiered in 1990, we would’ve been canceled because we would’ve have had no international audience and vocal twitter audience. But now the studio can see what’s going on with everyone who doesn’t have a Nielsen box in there house and say ‘Whoa, people are really watching.'”

“[Series creator] Eric Kripke wrote a beautiful pilot,” Ackles told TheWrap. “He created two characters that Jared and I are truly still trying to do justice to today.”

Chemistry between the leads is nice, too. “Jared and I have clicked really well and the fans have become incredibly vocal and passionate,” he continued. “There’s no formula to success in television. It’s a lot of luck, but there’s got to be a pretty good amount of strong material and talent to surround.”

The series started off simply enough. The Winchester boys chased down highway-haunting ghosts and wild Wendigos each week, with the occasional racist monster truck thrown in for good measure. But, it quickly added a fan-serving element. It got meta.

The Winchesters exorcised a demon on the Warner Bros. lot, where Padalecki — a “Gilmore Girls” veteran — makes a joke as their tour takes them through that show’s Stars Hallow set, for instance. There was even a Season 9 episode called “Meta Fiction.” Showrunners continued throwing nods to “Supernatural’s” ardent, ever-expanding fan base more and more each season.

This huge milestone means something different to each lead, but neither seems fazed by the moment.

“We auditioned one day 10 years ago and then we woke up this morning and we’re like, ‘What the fuck is going on?'” Padalecki said of celebrating the show’s milestone that day. “‘We have to wear a suit? I think I better shower.'”

“It means we get to party,” Ackles added.

Here are seven things to expect from “Supernatural’s” 200th episode:

1. Singing. Lots of glorious singing.
“There’s a musical aspect to it,” Ackles may have been underpromising.

2. But, maybe not from the characters we want.
Much to the chagrin of every fan who has seen Ackles sing karaoke, it might not be the Winchester boys who take the mic on Tuesday.

“I wouldn’t hold your breath for Jensen [Ackles] or I to sing,” Padalecki told TVLine at the same event.

3. More fan shout-outs than ever before.
“It’s a love letter to the fans,” Ackles explained. “Essentially all of the letters, the fan mail, the blogging, the creative writing that goes on based on this show, all of the conversations, we’ve all been quietly taking notes, the writers especially. Now they’ve whittled it down and put all of that into the script.”

5.  More huge cameos than you can shake a stick at.
The network remains tight-lipped over which familiar faces will return for the big two-zero-zero, but they assured fans the episodes will contain cameos aplenty.

6. And Wes Anderson references, too.

Episode 200 centers around a very lively on-stage production at a high school, according to its director Phil Sgriccia. He said Bill Murray and Jason Schwartzman‘s hilarious 1998 comedy “Rushmore” was a big inspiration.

“Two-hundred is a cross between ‘Rushmore’ and ‘Supernatural,'” he told TheWrap.

7.  The story is one geeks will love.
Mark Sheppard, who was just promoted to a series regular this Season, explained how this one is for the geeks.

“We’re all geeks.” Sheppard told TheWrap. “People are choosing ‘Supernatural’ for a very good reason, as they chose ‘Battlestar Galactica’ and ‘Firefly’ and ‘Doctor Who. ‘Because it’s good. It’s a good story. And episode 200 has a good story for the geeks.”

See a preview for the episode below: