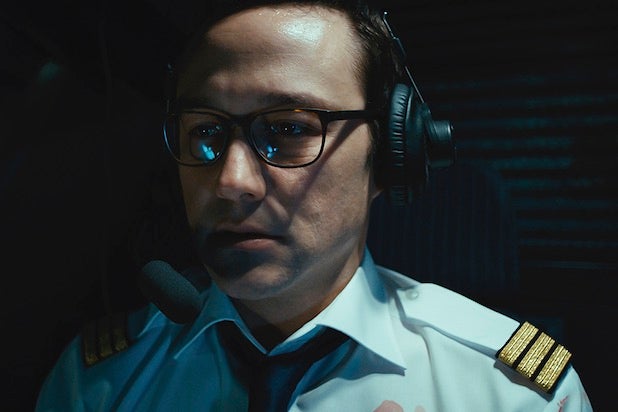 German director Patrick Vollrath became known in 2015 for his Oscar-nominated short “Everything Will Be Okay,” and that title phrase is used again a few times in “7500,” his feature film debut. But make no mistake, everything is not OK in Vollrath’s films – not in the short film, in which a divorced father tries to leave the country with his young daughter, and not in the feature, a hijacking thriller that takes place over 92 nerve-wracking minutes.

Starring Joseph Gordon-Levitt in a tour de force performance that finds the actor exploring various shades of desperation for pretty much the entire movie, “7500” is brutally simple and brutally efficient. It stays in a single claustrophobic location and takes place in long, uninterrupted takes – and once the tension begins about 10 minutes in, it never lets up.

You wouldn’t exactly call it fun or enjoyable, but it’s a thriller that does what it sets out to do, which is to make you uncomfortable and then wring you dry. And if you’re feeling cooped up being stuck at home, well, the proceedings here could make the smallest apartment feel spacious.

In the Amazon Studios release that premiered at last summer’s Locarno Film Festival, Gordon-Levitt’s character, Tobias, is an American pilot who lives in Berlin with his girlfriend and their 2-year-old son. He is serving as the first officer on a Berlin-to-Paris route when three Islamist terrorists armed with glass knives storm the cockpit on a mission to crash the plane. They threaten to kill hostages if Tobias doesn’t let them into the cockpit, and then begin to follow through on those threats.

We know that Tobias has a lot at stake, because he and his flight-attendant girlfriend were talking about school for their son before liftoff. And we know what the protocol is in these situations, as the air traffic controller reminds him, “I’m sorry, but under no circumstances are you allowed to open the cockpit.”

And as viewers, under no circumstances are we allowed to go anywhere except the cockpit. Once cinematographer Sebastian Thaler’s camera follows Tobias into that tight, cramped space at the beginning of the movie, it doesn’t leave; while we occasionally watch a screen that shows the activity in a small galley on the other side of the locked cockpit door, the entire movie takes place between a couple of seats and a narrow passageway.

In that space, and with a knife wound in his left arm, Tobias has to fend off attackers, fly the plane with one usable arm and figure out how to keep everybody on board from dying. Shooting the action in single takes of up to 45 minutes must have involved an intricate ballet between actors and camera, but it feels much more urgent and spontaneous than that; the movement is nervous but never frantic or showy.

And Vollrath lets the action speak for itself, with no musical score to amp up what we’re seeing on screen. The soundtrack is simply the sound that we use noise-canceling headphones to avoid – the steady rumble and hum of a plane in flight – along with occasional shouting and screaming and a steady pounding on the cockpit door.

The film is in the vein of other single-location dramas like Joel Schumacher’s “Phone Booth,” Steven Knight’s “Locke” or Gustav Moller’s “The Guilty” (Colin Farrell in a phone booth, Tom Hardy in a car and Jakob Cedergren in an office, respectively) but putting it in the air adds a touch of extreme jeopardy. And extreme is what Vollrath is after here, as the story continually finds new ways to make Tobias and the audience very, very nervous.

Also Read: Kevin Bacon Thriller 'You Should Have Left' to Skip Theaters for VOD Release This Month

After opening with a Gandhi quote – “an eye for an eye leaves the whole world blind” – the film is less interested in exploring the ethics or morality of its characters, and more interested in making the audience squirm. This is a noble B-movie tradition, of course, even though you get the feeling that “7500” would like to be more than that.

At a certain point, the action does get less physical and more psychological, and also less involving. As high as the stakes might be in a conversation between Tobias and the youngest and most conflicted of the terrorists (played by an appropriately tortured Omid Memar), that lengthy conversation is something of a talky letdown after what came before.

Still, Gordon-Levitt pulls out all the stops as an underdog Everyman pushed to the limit. He’s never looks physically powerful, which is sort of the point, but he sells the idea that Tobias can find a way to do what he needs to do. And even if the film can’t always sustain the tension without occasional lapses, it’s a nervy and accomplished calling card for Vollrath.

If he’s looking to get some more work out of this, everything might be OK after all.