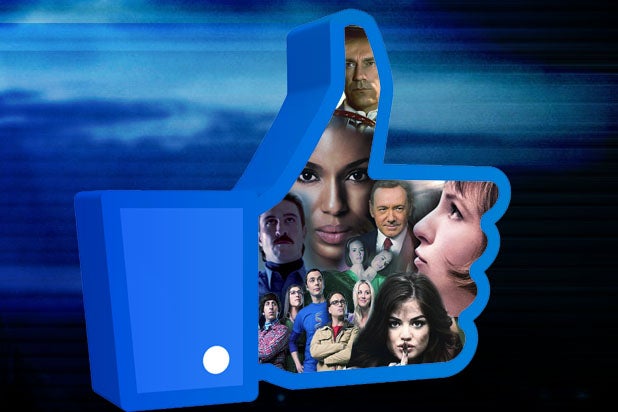 TV fans looking to supplement their favorite series between episodes have a viable option in Facebook.

While Twitter is the preferred platform for breaking news and live-event television, the world’s largest social network excels at long-form content, allowing shows and talent to engage with fans in a more robust, less fleeting way.

TheWrap selected the eight shows that best use the social media giant to keep their fans’ appetites whetted between episodes, chosen for unique engagement activity, not simply numbers.

Still, size counts, so we list the top 10 most talked-about 2014 TV shows on Facebook at the bottom of this post. And speaking of big-time reach, with Facebook’s 890 million daily active users, any television show not fully maximizing its presence on the social media leader in 2015 risks getting left behind.

Late-adopter shows should monitor these eight Facebook profiles to boost their own likes and interactions.

AMERICAN HORROR STORY
Network: FX
Facebook Fans: 10,387,771
Why So Good: Before the most recent installment in anthology series, “American Horror Story: Freak Show,” premiered, the “AHS” Facebook page posted a series of videos to the platform titled “Extra-Ordinary Artists.” These videos highlighted several of the show’s real-life “freaks” and their disabilities. A video featuring Mat Fraser, who plays “Paul the Illustrated Seal,” scored more than 5 million views on Facebook.

“We’ve seen an incredibly passionate response from our Facebook fanbase, which has nearly doubled in size in the last year,”said Stephanie Gibbons, President of Marketing, Digital Media Marketing and On-Air Promotion for FX Networks. “By mixing visually stunning and emotionally provocative creative with active and engaging community management, our page has created tremendous social buzz and viral reach for the show.”

GIRLS
Network: HBO
Facebook Fans: 1,670,962
Why So Good: The “Girls” Facebook page uniquely engages fans by teasing content via GIFs. The team will choose a specific line or snippet from an upcoming episode and turn it into looping video. On many such posts, there’s a link that takes fans to GirlsGIFs.com, which provides details of the scene or offers some insight into a particular character. In addition to the GIFs, the page regularly posts an “Inside the Episode” video, where creator Lena Dunham recaps the show’s latest developments.

“‘Girls’ has a very distinct and inherently millennial voice,” said Sabrina Caluori, vice president Digital and Social Media for HBO. “We look for ways to utilize native features like Facebook’s autoplay video to deliver micro-content that allows our fans to continue the conversation between episodes and seasons … punctuate the most poignant and shareable moments from the episodes and deliver them straight to our fans’ news feeds. So far, we’ve seen great success with these social tactics on Facebook as well as Snapchat, Tumblr and Twitter.”

Also Read: NowThisNews Shuts Down Website, Will Live Only on Social Platforms

HOUSE OF CARDS
Network: Netflix
Facebook Fans: 1,549,373
Why So Good: “House of Cards” maximizes its Facebook page by posting unique content such as faux press articles. These posts are a fun way to keep viewers completely engaged in the imaginary, dangerous world of Frank Underwood.

SCANDAL
Network: ABC
Facebook Fans: 2,853,563
Why So Good: “Scandal” does a particularly strong job of keeping fans in touch with the cast by posting when they appear on various talk shows. This strategy allows viewers to feel connected to the cast as human beings, not just juicy characters. While “Scandal” is known for live-tweeting episodes, its Facebook page can’t be overlooked in terms of important engagement.

“‘Scandal’ is on 22 times in a season, but fans want to stay connected to the story lines, the production, the talent and each other all the time,” ABC Executive Director of Digital Strategy Ben Blatt told TheWrap. “We provide them with behind-the-scenes access to the show, custom videos that are both professionally produced by us as well as taken on a smartphone on set.”

Blatt did note one aspect of Facebook that many marketers see as a negative, however:  “Facebook is also the only major social network that curates content based on on algorithm, which means not everyone sees everything that is posted, and only content that is perceived to be of value to the user is pushed to the top. We take that seriously and ensure we are only pushing content out to our fans when it is worthy of their time and is the best possible content that we hope they will enjoy engaging with. When that happens in the right way, more people are served it in their newsfeed, because fans and friends of those fans all know its great content and not spam.”

ORANGE IS THE NEW BLACK
Network: Netflix
Facebook Fans: 3,224,024
Why So Good: It seems like it would be impossible to maintain a Facebook page for a show that releases all of its episodes at once; however, “Orange Is the New Black” does an admirable job of providing fans with consistent content. While it doesn’t have the luxury of being able to tease between episodes, the “OITNB” page consistently posts screenshots with clever captions. The show’s social team also focuses on keeping content topical. Examples include posting Super Bowl-related material and Valentine’s Day cards featuring characters from the show.

They encourage engagement by declaring every Wednesday #OnWednesdaysWeWearOrange — a nod to pop culturally renowned film “Mean Girls” — asking fans to wear orange on Wednesdays and post to social media using the hashtag. Additionally, a behind-the-scenes video posted natively to Facebook during the holidays garnered more than 1 million views.

MAD MEN
Network: AMC
Facebook Fans: 2,746,964
Why So Good: The “Mad Men” Facebook page has remained busy conducting an ultimate countdown in preparation for the final season, premiering in April. Since Jan. 21, the page has posted moments from every episode of every season, starting from the very beginning, which has proved an engaging way to keep fans excited all the way up to this iconic show’s end.

“Mad Men’s” Facebook page also regularly re-shares fan-favorite quotes and capitalizes on topical moments — like when the show was a “Jeopardy!” answer.

“Facebook has been a great way for us to keep an active dialogue with ‘Mad Men’ fans all year long, particularly between new episodes,” AMC Networks head of marketing Linda Schupack told TheWrap. “There is so much interest in this show among sophisticated and socially active viewers that continuing to engage with them by sharing original content on platforms like Facebook has been an important part of a powerful and ongoing conversation that ensures ‘Mad Men’ is never out of season.”

THE BIG BANG THEORY
Network: CBS
Facebook Fans: 33,766,822
Why So Good: “The Big Bang Theory” Facebook page (like those for many CBS shows) consistently post links to “listicles” that live on CBS.com. This style of writing has become an increasingly way to deliver content in a concise and fun manner, pairing words with photos and/or GIFs. CBS also heavily promotes its top shows across various Facebook pages; for example, an article entitled “13 Tips to Living with a Roommate” was posted on “The Big Bang Theory’s” page, though it ultimately promoted new sitcom “The Odd Couple.”

“We use social platforms like Facebook to keep engagement high between episodes,” Rob Gelick, senior vice president and general manager, Digital Platforms, CBS Interactive Entertainment, told TheWrap. “We can dive deeper into the characters, provide glimpses into production, and have a little fun with our fans by exploring the show beyond a single episode. Social is a powerful way to introduce our existing audience to new programming, so we experiment with producing content that spans across shows to expose our followers to a broader set of our programming.”

PRETTY LITTLE LIARS
Network: ABC Family
Facebook Fans: 14,591,241
Why So Good: “Pretty Little Liars” is another show that keeps fans connected with the cast. Capitalizing on its attractive, young actors, “Pretty Little Liars” drives traffic to its Facebook page by posting a ton of easy-on-the-eyes images. Also, the “PLL” team exploits social media trends such as #MCM (Man-Crush Monday) and #WCW (Women-Crush Wednesday). Finally, they regularly repost Instagram (which is owned by Facebook) photos from the series’ leads, resulting in a weekly PLL Insta Recap.

As promised above, here are 2014’s Top 10 most talked about TV series on Facebook, ranked in order of total interactions: