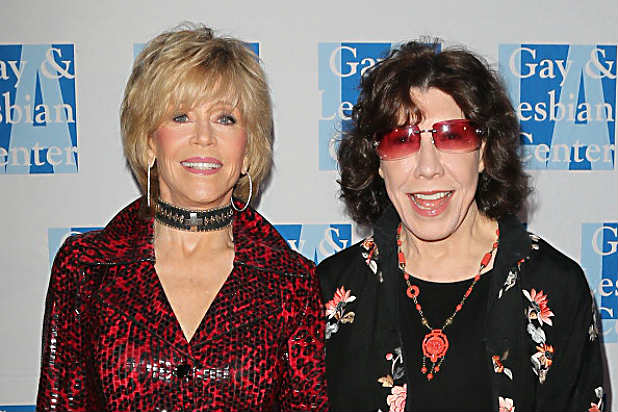 Thirty-four years after “9 to 5,” Jane Fonda and Lily Tomlin are reuniting for a new Netflix series about women brought together when their husbands decide to marry each other.

“Grace And Frankie” was created by “Friends” co-creator Marta Kauffman and ” “Sullivan & Son” writer-producer Howard J. Morris. Netflix has ordered 13 episodes of the half-hour series, which will premiere next year.

The single-camera comedy finds Grace (Fonda) and Frankie (Tomlin) facing the last chapter of their lives together, instead of with the men they married. Eventually they learn to rely on one another.

“Jane Fonda and Lily Tomlin are among the funniest and most formidable actresses ever and it’s an incredible privilege to give them the opportunity to run riot on Netflix,” said Ted Sarandos, Netflix’s chief content officer. “The show created for them by Marta and Howard is warm, very funny and anything but wholesome. We can’t wait.”

“Netflix is redefining the way we produce and consume television and its a true privilege to be in business with Ted and his amazing team,” said David Ellison of Skydance. “Working with the wonderfully talented Marta, Jane, Lily, Howard and their producer Paula Weinstein is a dream come true, and the story they have crafted is both hilarious and heartfelt.”

Two-time Oscar winner, Emmy winner and Tony Award nominee Jane Fonda recently starred on HBO’s “The Newsroom,” and was nominated for an Emmy for Outstanding Guest Actress in a Drama Series. She recently played Nancy Reagan was seen in “Lee Daniels‘ The Butler” and appears in “Better Living through Chemistry,” now in theaters.

Oscar-nominated Lily Tomlin recently won an Emmy for the HBO film, “An Apology to Elephants,” which she co-executive produced and narrated. Tomlin has won two Tony Awards, two Peabody Awards, seven Emmy Awards and the Mark Twain Prize for American Humor.  Last year, she co-starred with Tina Fey in the film, “Admission,” and currently appears on Showtime’s “Web Therapy.” She performs live in 30 to 50 theater concerts each year.