New trends in animation and technology continued to be unveiled at Comic-Con as Focus Features presented a panel Friday afternoon spotlighting its CG-animated film "9."

Shane Acker’s feature-length film was developed from his short, which was nominated for an Academy Award in 2005. The director unveiled a trailer in which nine "stichpunks," which resemble funky rag dolls, who exist after the destruction of Earth. 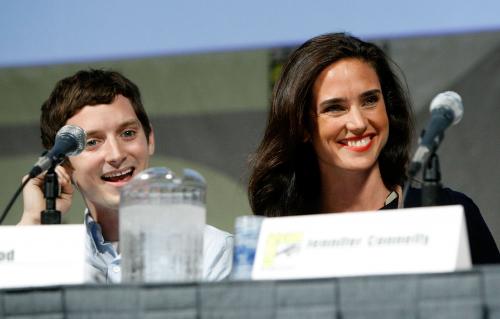 "It’s a quest for these characters to find out where they are and what they came from and in order to do that they have to discover who the humans were in the past," Acker said.

"I saw Shane’s film and immediately connected to it. You see a lot of personal films but you don’t see a lot that are animated," Burton said of the film. "We’ve been through endless conversations with studios (that demand): ‘Can’t you give you the characters eyeballs, because you can’t tell what they’re thinking?’ So I saw Shane’s characters didn’t have any eyeballs and I thought I could at least help him fight those battles … and beat up anybody who got in his way."

Wood said he was attracted to the film because of Acker’s initial short film.

"When I was initially approached about this project, I was given a conceptual project that had a synopsis and the script and the short, and I was so in love with the short that for me, that was it," he said.

He said he also drew similarities between his character Nine and Frodo from "Lords of the Rings."

"They’re both coming into the world and forced with a task they must face. (Nine) has so much he has to figure out, and he comes into this world and he sees that there are others like him who are sequestered in this fear-based hierarchy that’s keeping them from getting any answers. He doesn’t know to be afraid, so ultimately he carries on and that sets forth the journey at hand."

Connolly, who plays Seven, said she had never voiced a character before but enjoyed playing such a physically tough character.

"I’d love to be able to do stuff like that in a live-action film,” she said, “but I don’t think I could it off in nearly a fantastic manner as she does."

The scene from the movie that was screened emphasized Connolly’s point: When Nine and the character Five journey back to find their friend Two, who has been taken by a beast, they are forced to fight a monster. Seven, Connolly’s character, comes to the rescue by beheading the beast with a spear.

But the characters aren’t out of danger yet — they’re attached by another beast-like creature that spews lightning and harms Two. As the world crumbles around them, the friends must band together to avoid sudden danger.

Acker said it was a "real challenge" to animate the film. "But sometimes those design limitations give the best result because you really have to get creative."

"It’s a good time to be in animation," Burton echoed. "What I liked about Shane was that he used the principals of stop motion and it has a real stop motion feel to it. Everybody did such a great job in making the performances very naturalistic, which you don’t see a lot in animation."

But adult-driven animated films have often proved to be flops at the box office, one fan asked — how will "9" perform?

"Sometimes we don’t even think of this as animated film … it takes place in this post-apocalyptic world but it’s really about the story we’re trying to tell," Acker said. "I think the strength of it is in the story and characters so I hope it performs well at the box office, but I guess that’s largely determined by you guys out there."