“Pay like it’s 1985,” reads the marquee, mere feet from the sign advertising gallons of gas for $0.91. And if that sounds like a leap, it is – but the gas, the prices (and the lucky Los Angeles drivers pumping it) are all very real.

NBC took over a Santa Monica Boulevard gas station Thursday to promote its reboot of “Quantum Leap,” which debuts this coming Monday on the network. The original show actually premiered in 1989, but sent Dr. Sam Beckett (Scott Bakula) hopscotching around all manner of gas-price eras.

Participating motorists first went through a “drive-through experience” blocks away from the station to gain access to the 91-cent gas, and were capped off at pumping 10 gallons apiece (actually, that sounds like more of a 1970s thing?). All grades were available – including diesel – as long as supplies lasted in the one-day popup set to end at 6 p.m. Thursday. 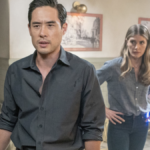 Also Read:
‘Quantum Leap': Everything We Know About the NBC Reimagining

The network was also offering real movie tickets for $3.55, a “1985-price” deal done in conjunction with Fandango.

Peacock will carry “Quantum Leap” episodes the day after they air on NBC.