While fans of the Tim Minear-run “9-1-1” universe – which was renewed today for Season 5 for “9-1-1” and Season 3 for “Lone Star” — are probably sad to see the back-to-back Monday lineup broken up this fall, Fox executives promise that when the L.A. and Austin teams are reunited on the same night in March, it will be worth the wait – because a second crossover event is coming in 2022.

“Somewhere, as we’re bringing the show back, keep an eye out for– spoiler alert: keep an eye out for a crossover in the back half of the season,” Michael Thorn, president of entertainment at Fox Entertainment, told TheWrap on a call with reporters ahead of the network’s upfront presentation Monday.

Fox Entertainment CEO Charlie Collier emphasized that even though the Rob Lowe-led “Lone Star” isn’t going to be the lead-out for the Angela Bassett-starring “9-1-1” in the fall, the choice to break them up at the start of the 2021-2022 season is a decision to “maximize the power of the franchise.” Because “9-1-1” will hand over its 8 p.m. on Monday time to “Lone Star” at midseason, before giving it back to its parent series in March and moving to the 9 p.m. slot.

Thorn added that using “9-1-1” as a highly rated lead-in to launch “The Big Leap” off of is a strategy also being applied to pairing the established “The Resident” ahead of Lee Daniels’ new drama “Our Kind of People” on Tuesdays. 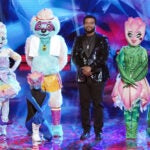 “But almost half of the schedule will be paired in a really powerful block in the second half,” Thorn said.