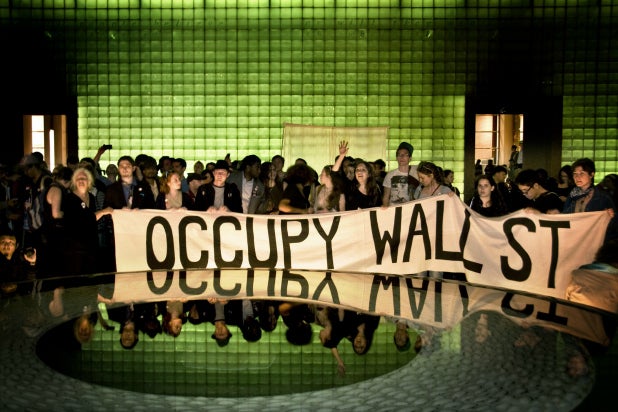 All those lines from “The Sound of Music” about catching a cloud and pinning it down, holding a moonbeam in your hand and keeping a wave upon the sand ran through my mind while watching the new documentary “99%: The Occupy Wall Street Collaborative Film.”

Since the movement itself avoided labels, leaders and agendas, it’s next to impossible to tell its story in a way that seems remotely definitive.

Not that directors Aaron Aites, Audrey Ewell, Nina Krstic and Lucian Read don’t give it their best shot, compiling footage from hundreds of filmmakers and Occupy participants and weaving together a history of this grass-roots rebellion against the corporatization of the planet.

You won’t find many voices in “99%” dissenting against these dissenters, apart from clips of some smug cable-news talking heads, but at least Naomi Wolf pops up a few times to give Occupy some tough love.

At one point, she provocatively insists that anyone who thinks that putting income inequality into the general conversation counts as enough of a victory is playing into the plutocrats’ hands, and the movie could have benefited from more people asking tough questions about Occupy’s methods and its results.

Whatever anyone’s quibbles might have been about Occupy Wall Street, there’s no denying that the movement tapped into the zeitgeist, and the movie very skillfully goes from the macro (coverage of the various demonstrations and encampments) to the micro (interviews with individuals who suffered in the mortgage crisis, searing examination of the behavior of the police and the suppression of the public’s rights to free press and general assembly).

Even though the filmmakers are working with a crazy-quilt of footage shot on everything from professional equipment to webcams and iPhones, “99%” never feels awkward or jerky; the directors implement split-screen, intertitles and other devices that let us know when and where we are, who’s speaking and what the overall context of each moment means.

There’s nothing in “99%” that’s going to win over anyone who looks at this whole movement as some sort of noisy hippie nonsense, but for the people who were there in person or in spirit — and for the many more who have been and will continue to be inspired by Occupy’s message — it’s a powerful home movie of a brief moment when a portion of the famously complacent American populace stood up and made some noise.