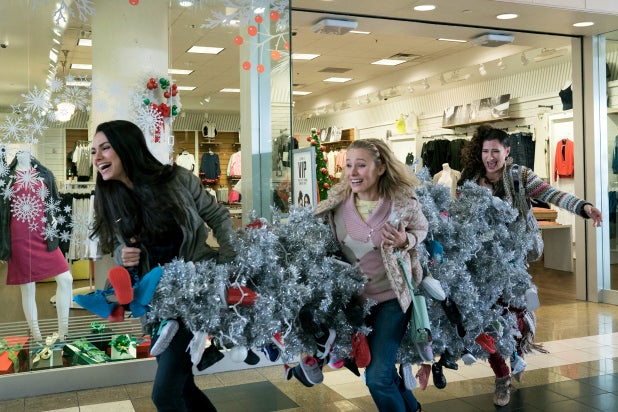 You can call “A Bad Moms Christmas” a “Bad Moms” movie, but it’s really a “Christmas” movie, and a perfectly serviceable one if you don’t mind not laughing much. It’s like a buffet of appropriately themed holiday snacks whose inherent festiveness you can admire, even if you’re not exactly sated after sampling.

And yet there’s still a base-level joy in taking in a big Hollywood comedy starring women, even if doubling the number of central female figures — with the addition of Christine Baranski, Cheryl Hines and Susan Sarandon as the generation before Mila Kunis, Kristen Bell, and Kathryn Hahn, respectively — inexplicably doesn’t bring as much funny as last year’s likably naughty original did.

It’s a mighty star quotient this time around, led by the prickly tickles provided by Hahn and Baranski, but without the initial goofy spark of watching beleaguered moms form a rabble-rousing sisterhood, there’s a regrettable lack of comic ingenuity in how this installment mines the well-worn trope of coping adult daughters and set-in-their-ways matriarchs not getting along.

The original’s writer-directors, Jon Lucas and Scott Moore, wrote “The Hangover,” and it’s that film’s what-happened-last-night opening they crib for this movie’s setup, with newly divorced Amy Mitchell (Kunis) sitting forlorn on the stairs on Christmas Eve, her house a yuletide mess, wondering what went wrong (via narration) as a camel ambles across the frame. (Never fear, those worried about animal cruelty in R-rated comedy: that’s the ungulate’s sole sight gag.)

We then go back a week to when things were hunky-dory, if seasonally hectic, across the households of OG trio Amy — now happily dating widower dad Jesse (Jay Hernandez) — married mother-of-four Kiki (Bell), and tart-tongued single parent Carla (Hahn).

All at once, like gunslingers upon a peaceful town, the women’s mothers show up unannounced: Impeccably dressed, haughty, perfectionist Ruth — a role Baranski could play in her sleep — quickly sets a land-speed record for inadequacy insults aimed at Amy and her lacking holiday prep. Ruth’s overhaul plans: over-decoration, intensive caroling, and a swanky house party.

Pathologically ebullient Sandy (Hines) takes closeness to Kiki beyond mere eccentricity (wearing clothing plastered with Kiki’s face) into disturbing, marital-bed-invading territory. An 18-wheeler, meanwhile, drops cowboy-hat-wearing, itinerant grandma Isis (Sarandon) off at her daughter Carla’s house. Though like-minded parent and child immediately share a spliff in reunited happiness, it quickly becomes clear that cash-strapped Isis’s devil-may-care lifestyle is something about which even Carla has reservations.

All in all, it’s enough mama drama for the put-upon daughters to announce during a beer-sloshed break at the mall food court that they’re “taking Christmas back,” which here means starting with a slo-mo wreck-the-joint montage. The Xmas edition of “Bad Moms” is OK if not laugh-out-loud, culminating in a grind-and-twerk foursome with a mall Santa. Ho ho ho-hum. But then the slo-mo gets trotted out again for a dodgeball free-for-all featuring all the families at a Sky Zone trampoline center, and it sinks in just how threadbare the movie is with its mix-and-match family dysfunction comedy.

Movies like this care less about the rational progression of situation and character than piling on the wisecracks and outrageous behavior before braking hard with heartfelt reconciliation. The casualties include less of the first movie’s amusing chemistry between Kunis, Bell and Hahn — forced as they are into individual subplots with their respective characters’ mothers — and the fact that Baranski, Hines and Sarandon play types that veer wildly between crazy and believable.

Ice-queen pro Baranski does the best job of somehow connecting Ruth’s more extremely critical qualities with pendulum-swinging scenes of grandmotherly tenderness into someone recognizably complicated. (Helping sell the idea that she isn’t simply awful is the unerringly sunny disposition of Amy’s father, played by Peter Gallagher.)

Hines and Sarandon, as more cut-and-dried disrupters, keep things spirited, but their shtick doesn’t land as well. It’s still unclear whether Sarandon hopping on to a bar to lick a male stripper’s nipples is intended to be raucous, gross, funny, or some combination of the three. Such is the state of lewd comedy these days.

That same stripper, though, a nice fireman named Ty (Justin Hartley, “This is Us”), is part of the movie’s most effortlessly enjoyable thread, a chance at love for spa employee Carla. The pair’s spark — part endowment humor, part waxing gags, part loopy affection — is where the movie finds its surest sweet spot between the raunchy and romantic.

Which isn’t to say Kunis and Baranski don’t completely sell their teary truce after the expected nasty blowup. They’re too talented not to bring it all home with the right amount of sincerity and humor about these movies’ justifiable selling point: it’s okay to screw up if your heart’s in the right place.

It doesn’t quite make up for the fact that this yuletide-themed sequel is so sloppily laugh-deficient and obvious about holiday craziness and button-pushing loved ones. But if you’re going to see a comedy that isn’t all that funny, you could do a lot worse than the slapdash all-ladies feel-good of “A Bad Moms Christmas.”