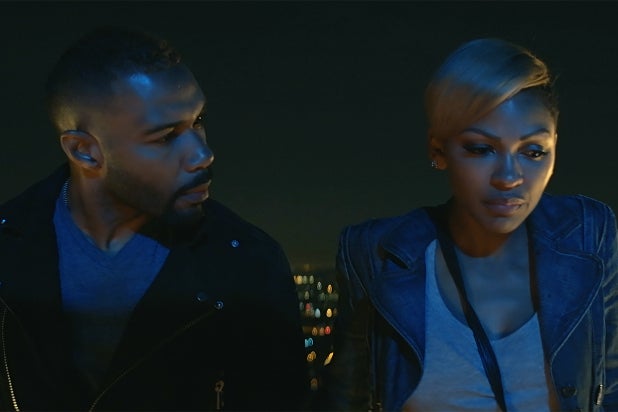 For a certain percentage of the country, the best thing that could have happened to them on Election Day 2016 was if they had met someone. At least that’s the idea offered in “A Boy. A Girl. A Dream.,” co-writer (with Samantha Tanner) and director Qasim Basir’s underwritten and often irritating romance that’s like a combative “Before Sunrise.” Forget Republicans versus Democrats; the real conflict is between new loves.

The evening in question begins near a food truck. Cass (Omari Hardwick) is hanging with his friends when he spots Frida (Meagan Good) eating alone and strolls over to chat her up. He invites her to a club, an invitation she initially turns down but then accepts. In the meantime, Cass takes a call from his son, saying that his mom is “screaming at the TV.” He says to the boy, “It doesn’t matter what happens tonight. What did I tell you? ‘I’m a strong, smart, loving black man.'”

Except that’s not really good enough these days, is it? After Cass moves in for a kiss and then more at the club, Frida bolts, and they start the first of their many arguments outside. His bruised ego means that he’s not going light on her for being huffy, and he walks away. But then two white guys start harassing Frida and Cass steps in — only the altercation gets aggressive, and he’s the one who ends up with a police baton to his neck. They let him go, but his emotional wound widens, and now Frida tries to placate him as he fixates.

They continue in this manner, prodding each other throughout the night as we follow them through a Lyft ride, to a party, through another Lyft ride, and then to a diner. The conversation is never smooth. It revolves mainly around the question, “What do you really want?” She’s a lawyer who wants to be a DJ; he’s a promoter who wants to direct movies. Both accuse the other of having given up, never mind that they don’t know each other. It gets old fast.

Basir filmed “A Boy. A Girl. A Dream.” in one take, an always-impressive feat whose fluidity makes a nice visual counterpoint to the prickliness of the dialogue. That dialogue is best when it focuses on issues you can actually take seriously, such as Trump’s win (Cass bemoans the kids who have him to look to as their first president) and the inequality and violence faced by African-Americans. (“You gotta wake up and act like s–t didn’t happen,” Cass says. “You can’t know about it.”)

But the couple’s talk about dreams deferred is too knee-jerk to warrant sympathy. And though a lot of quiet in between their squabbling is sometimes a relief, it ultimately points to an underdeveloped script that suggests it’s more profound than it is. These two are a little too comfortable with silences.

Good does the best with what she’s given. Hardwick, however, front-loads his performance with constantly shifting eyes and a general fidgetiness that’s distracting. What he does get right is wearing his character’s anger on his sleeve: Regardless if it’s over the injustices he’s seen, the outcome of the election, or whatever happened to make him put off a film project (we see on his phone’s screen that he last played the short four years ago), Cass’ pain is evident.

It’s laughable when Cass tells Frida, “I had a great time. I had a lot of fun tonight” when he’s been nothing but moody nearly the entire evening. And she’s not the only one who gets to battle him: When he makes a brief speech at the party after the election is called about how they “still have to fight,” an acquaintance needles him with, “That means you too, right?” What’s being implied there is as much a mystery as what Frida sees in Cass.

Even though they unsurprisingly make nice eventually, when she asks him if he’s OK and he says, “I will be,” well, you don’t really believe him.