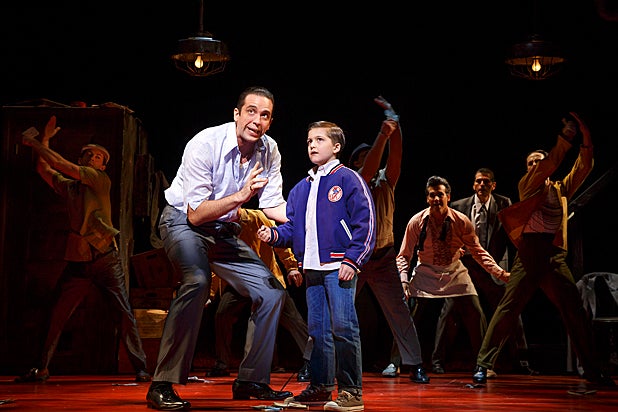 The less Chazz Palminteri appears in “A Bronx Tale” the softer his show grows. What began as a tough one-man play written and performed by Palminteri, in 1990, soon spawned a film in which the actor essayed just one role: Sonny, a street-corner mobster who wrestles for the soul of a young boy against the best wishes and deep fears of his bus-driver father.

“A Bronx Tale” is now a musical, which opened Thursday at the Longacre Theatre. While Palminteri wrote the book, he gives the Sonny role to his Broadway doppelganger, Nick Cordero, who a few seasons ago played the Palminteri role of Cheech in the short-lived musical “Bullets over Broadway.”

Once again, Cordero is good and sleazy enough so that we never miss the original too much. He lacks Palminteri’s heavy elegance, but his is an understated performance that gives the musical a solid foundation. Also very fine is the delectable Ariana Debose, who plays the love interest, and a gifted child actor named Hudson Loverro. The huge obstacle to overcome in putting “A Bronx Tale” on stage is finding the right kid for the early scenes. Problem solved: Loverro brings real street edge to the young Calogero, who prefers being feared, like Sonny, to being beloved, like his financially struggling father (Richard H. Blake).

Unfortunately, Loverro doesn’t appear in the second act of “A Bronx Tale.” The result is that Calogero (a.k.a. C) may be the only character in showbiz history who becomes less jaded when he grows up. It’s a problem the musical shares with the movie, which structurally resembles “West Side Story.” The adult Calogero (Bobby Conte Thornton) falls in love with a black girl (Debose), and the result is not one but two rumbles. The death count is three for “West Side Story” and a whopping six for “A Bronx Tale,” which both opens and closes with an assassination.

So why does the adult Calogero have to be as strictly white-bread boring as Tony in “West Side Story,” one of Palminteri’s favorite musicals? While some of the problem is Thornton’s vanilla performance, the book gives its lead character little to do but narrate. At least Tony gets shot to death in “West Side Story.” And he sings “Something’s Coming,” “Maria,” “Tonight,” and “One Hand, One Heart.”

Pity the boy Sonny nicknames C. He and others are saddled with the music of Alan Menken, who has written a score (lyrics by Glenn Slater) that’s very much in the vein of his “Little Shop of Horrors,” “Beauty and the Beast,” and “The Little Mermaid.” Melodically, nothing in “A Bronx Tale” sounds substantially different.

The show begins in 1960, meaning the Bronx street corner features a doo-wop boy group that sounds every bit as major-key as the girl group from “Little Shop.” When the show switches to 1968, we’re taken to a neighborhood record store that features albums by Aretha Franklin, James Brown, and Ike and Tina Turner. So why does everyone sound like they’re still listening to the Four Seasons and the Ronettes despite all the violence and death circling around them?

Menken and Slater attempt to get serious with their last two songs, “In a World Like This” and “The Choices We Make,” where the music is on a par with the lyrics: “It’s never black or white, just shades of grey/All we do, is face up to those choices/And obey our inner voices/And hope we find our way.”

Robert De Niro and Jerry Zaks co-direct “A Bronx Tale,” having performed those chores, respectively, on the film and the play. On those occasions, though, they did not have to contend with a score that’s more Disney than the Bronx.