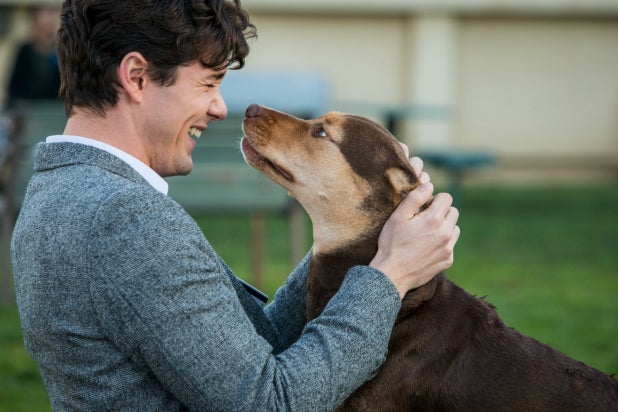 “Homeward Bound: The Incredible Journey” is letting out a huge howl right about now. “A Dog’s Way Home,” the latest in the canine-loving cinematic universe (from the screenwriters of 2017’s scandal-plagued “A Dog’s Purpose”) employs all the same tactics as the 1993 hit family film: the adorable-sounding narrator, a pet’s love for their human so deep that they journey through perilous environments in hopes of being reunited, and the intermingling stories of those they come across while trying to get back home. But “Homeward Bound” made it enjoyable.

Bella (voiced by Bryce Dallas Howard) is born a stray. She lives in a happy coexistence — with her littermates, mother, and a cat with her own litter of kittens — under the rubble of an abandoned house, until Animal Control shows up and rips her family away. Mama Cat takes Bella in as her own, even nursing her until a human named Lucas (Jonah Hauer-King, TV’s “Howards End”) discovers the lone pup and quickly falls in love with her.

Along with his Army veteran mother Terri (Ashley Judd), he raises Bella, who quickly becomes an unofficial support dog not just for Terri but also for the other veterans that Lucas works with at a Denver VA hospital. The ornery landowner of the vacant site, having been irked by Lucas one too many times, sics Denver Animal Control on Bella, who is half pit bull and thus in danger of being euthanized, as pit bulls are illegal there.

Lucas’ girlfriend Olivia (Alexandra Shipp, “Love, Simon”) arranges for a family member to care for the dog until Lucas and Terri can move outside of the city limits, where Bella will be safe. Unfortunately, Olivia’s relatives live over 400 miles away. And since Bella doesn’t understand — and she can’t bear to be apart from Lucas — she runs off in an effort to go home.

As a dog owner and a mother, I’m usually easy picking for films like these, but instead, I found myself watching scenes in horror. Sure, the narration is adorable, and there are the cute moments you expect in a movie about our canine besties. But almost nothing outside of the narration lends itself to being family-friendly. For example, at certain point in the film, Bella is chained to a dead homeless man. Yes, you read that correctly: A DOG. IS CHAINED. TO A DEAD MAN.

I am not sure if any of the filmmakers have ever had young children, but imagine how many parents will have to explain that scene to their sobbing five-year-olds on their way home from the theater. And that’s one of the less horrifying moments.

Several choices made me wonder what, exactly, director Charles Martin Smith (“Air Bud,” “Dolphin Tale”) had in mind, and what kind of film he thought he was making. The movie takes place between New Mexico and Colorado, and is about a dog’s journey through those environs to find his way home, yet not once is the audience truly given a chance to take in the gorgeous landscape of the area. A sense of the natural grandeur might emphasize just how incredible a journey Bella is tackling in the name of love. It’s only through the narration (and the change of seasons) that viewers learn that Bella has been missing for over two years, something that neither the people she encounters nor the circumstances she survives even hint at.

There’s also the odd choice of CGI, specifically for a cougar that Bella befriends in her travels. Yes, using a real cougar would have posed many dangers on set, but the CGI is so poor, the close-ups of “Big Kitten” look like a Chuck E Cheese reject. There’s a specific scene that should have been “awww” inducing, but the clunky animation strips away any possible cuteness and strands the moment in the uncanny valley.

Putting a dog in crisis might seem like an easy way to create a great story, but in a family film, featuring a helpless canine in constant peril plays as emotionally manipulative and, frankly, slightly traumatizing. “A Dog’s Way Home” is a joyless jaunt that offers an adorable canine star and not much else.