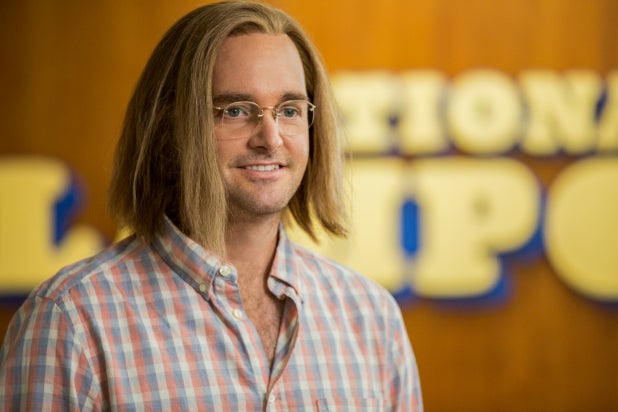 It’s hard to overstate the impact of National Lampoon magazine, but director Douglas Tirola tried anyway in 2015 with “Drunk Stoned Brilliant Dead,” a documentary examining its history and legacy.

As much as David Wain’s “A Futile And Stupid Gesture” (premiering on Netflix January 26) might feel like a retread of its buoyant history lesson, his adaptation of Josh Karp’s book of the same name focuses primarily on the exploits of Lampoon co-founder Douglas Kenney, filtering the publication’s incendiary accomplishments through his suitably troubled personal history while assembling an impressive cast of contemporary comedy stars to provide some occasionally wildly uneven but always fun-to-behold impersonations of their iconic predecessors.

Hollywood eventually comes calling and Kenney turns his attention to writing “Animal House,” a comedy inspired by anecdotes from Lampoon contributors’ collegiate days. But the film’s success proves too much for Kenney, who first finds it difficult to craft a follow-up that’s worthy of the box office record breaker. Even when he does, Kenney then struggles to come to terms with the effects of his own drug-addled creativity upon colleagues, friends and finally, himself.

If there’s a perfect midpoint between Will Forte’s exhilarating, gonzo turn as MacGruber and the drily sweet role he played in “Nebraska,” Doug Kenney might be it, astutely juggling the responsibility of being extremely funny while showcasing how, and why, his real-life counterpart never quite captured as much of the spotlight as his colleagues. The fact that Forte is too old for the retelling of literally any part of Kenney’s life — he’s 47, Kenney died at 33 — feels like a tribute to the impertinent spirit of the Lampoon (which clowned its co-founder even posthumously), but Wain and screenwriters John Aboud and Michael Colton offer an affectionate portrait of his life and times that harness Forte’s natural skills as both a weirdo and a charmer.

Meanwhile, even if the casting choices in portraying some of iconic talents in Kenney’s orbit are occasionally questionable — a detail the film gleefully acknowledges — there’s something delightful about watching actors known for comedy now try to capture the sound or energy of the performers who inspired them. McHale looks nothing like Chevy Chase, for example, but he eerily captures Chase’s deadpan delivery (no doubt a talent gleaned during their time working together on “Community”) while also infusing the performance with a slight soulfulness that probably wasn’t necessary but rounds it up from just being skillful mimicry.

Emmy Rossum, playing Kenney’s longtime companion Kathryn Walker, brings a ray of sunshine to the second half of the film without much evoking the real star of “Slap Shot” and “Neighbors” (if you remember her at all). Collectively, they establish the intoxicating, anarchic atmosphere in which Kenney first thrived, then became overwhelmed, as his own profile began to clash with not just the concentric circles of commercial and critical acclaimed garnered by his colleagues but also, as we learn, the desperate yearning for a certain kind of approval he never seemed to get from his parents.

Thankfully, most of the film’s dramatic pivots are either underplayed or sewn into the fabric of the story via recreations of famous Lampoon bits, such as when the deterioration of Kenney’s marriage is depicted via a photo comic like those that frequently appeared in the magazine. (Martin Mull also appears in the film as an older version of Kenney, who narrates the film and frequently dismantles its necessary diversions into the more conventional conflicts he has with his parents, friends and lovers.)

But even if Kenney’s premature death at age 33 was a considerable loss for the world of film comedy (in addition to the magazine, he gave audiences both “Animal House” and “Caddyshack”), Wain and his collaborators are more eager to celebrate his influence than to belabor the tragedy of his absence. Indeed, it’s the only film I can ever remember culminating with a food fight at a funeral that’s equally funny and sad.

Whether or not it’s perhaps slightly superfluous after “Drunk Stoned,” “A Futile And Stupid Gesture” is, ultimately, anything but pointless, exploring an important moment in pop culture through the life of a man who captured its essence as well as the people who made him an institution while using his work to tear down so many others.

Ramis hit big with “National Lampoon’s Animal House” in 1978 — and never looked back. Here’s a look at the dizzying run of film and TV projects that made him an undisputed comedy titan