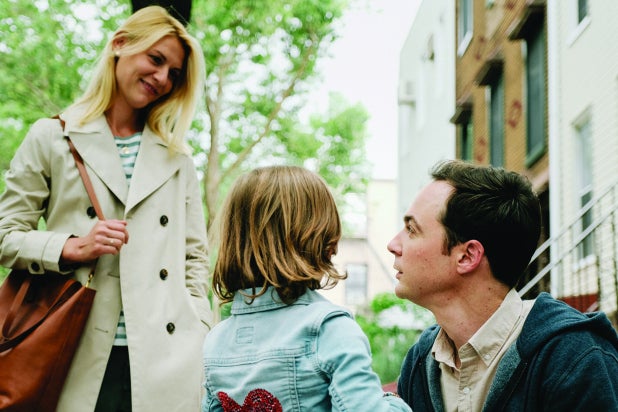 The problem with “A Kid Like Jake,” which is about a four-year-old boy who enjoys taking on female roles whenever he plays, is that we see so little of the title character.

The film opens with some fairly random shots of New York buildings, and then there are handheld camera shots of Jake (Leo James Davis) running around at home. But we mainly just hear about Jake after this brief sequence, and this signifies the theatrical origin of this material, which was adapted by writer Daniel Pearle from his own play.

We first see Jake’s parents Alex (Claire Danes) and Greg (Jim Parsons) in bed together. Danes works hard to seem relaxed and happy, but the effort shows too much, and this could be a character choice, for it seems clear from the beginning that Alex and Greg are somehow at odds with each other or mismatched.

Greg is a therapist, and we watch him at work with one female patient throughout the film in aimless scenes that add very little to the main drama. Alex is a stay-at-home mother, and her own very overbearing mother Catherine (Ann Dowd) constantly derides her daughter’s choice. “Thank God for the women’s movement,” Catherine says ironically as she watches Alex with her child.

Alex is very close to Jake, and she happily lets her son play Cinderella and other female characters until this is brought to her attention by Judy (Octavia Spencer), a friend who is trying to get Jake into a private school. The interesting thing about the character of Judy in her first scenes in “A Kid Like Jake” is that she seems misguided and opportunistic. In trying to make Jake’s female role-playing a kind of selling point to get him into an exclusive school, Judy exposes the fault lines in the marriage of Alex and Greg.

By the mid-section of this movie, “A Kid Like Jake” has become the sort of marital study where all we do is observe Danes’s Alex say cruel things to her husband. When she initially starts to needle and verbally attack him, it feels as if Alex is inevitably reacting to all of the aggressive verbal taunts she has to endure from her mother.

But as the film goes on and Alex keeps on deriding Greg, the narrative doesn’t expand but contracts, and this isn’t helped by the nervous, peremptory editing of all the confrontation scenes, which seeks to create a tense atmosphere for the actors rather than letting them take care of that themselves.

Alex realizes that she is pregnant again, and she is scared because she had miscarried a previous child. Jake starts getting bullied at his pre-school, and so Alex feels that she needs to try harder to get Jake into that private school because he might be bullied more in a public school with lots of kids.

“Why can’t I be Rapunzel?” little Jake asks, but Alex tries to steer him to a male Halloween costume. When Alex attempts to tell Catherine about the situation, Pearle does give this abrasive character a pretty sharp laugh line: “No need to explain,” Catherine says. “I read The New York Times.”

Spencer’s character Judy tells her friends that they are lucky to be dealing with this situation in 2018 and not 50 or even 20 years ago, but Alex is not as liberal as she thought she was when it comes to her own son. By the time Alex is blaming Greg for not ever taking Jake to a park or “throwing a ball” with him, Danes has managed to make her character into a woman just as unlikable as her mother.

The writing in “A Kid Like Jake” feels more like playwriting than like screenwriting because we are told things in dialogue about Jake but barely ever get to see him behaving. Clearly this is a choice on the part of the creators, but doesn’t it signal the same kind of avoidance or fear that the movie itself is supposed to be about?