Prime Video’s “A League of Their Own” tackles many themes, but one in particular that comes up, again and again, is female friendship — and that theme truly takes center stage in the series’ emotional finale episode.

Inspired by the beloved film of the same name, “A League of Their Own” follows the development of the All-American Girls Professional Baseball League and how it changes the lives of the Rockford Peaches players. But the series also takes its own path to explore the intersections of race and gender, as well as sports, during the historical beginning of the girls baseball league during World War II.

The series also spotlights queer storylines that change the lives of the team members. Main character Carson Shaw (Abbi Jacobson) meets Greta Gill (D’Arcy Carden) and Jo De Luca (Melanie Field) on her way to tryouts. Greta and Jo share a tight bond, with plans to move to California after the season ends. But when Carson starts falling for Greta, and Greta returns the feelings, plans become subject to change, and Jo realizes that things are different now. 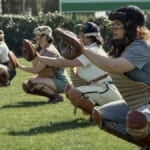 Also Read:
How to Watch ‘A League of Their Own’: Is the Baseball Series Streaming?

“They’ve been together for so long that there’s like chapters of their life,”  Field said. “I’m sure that at some point, Jo was head over heels in love with Greta. Maybe she always is a little bit.”

Jo hints that she is queer to many of her teammates, but Greta and Carson keep their developing relationship under wraps. Jo tries to watch out for Greta, because a previous relationship of hers with another woman didn’t end well.

“Their relationship is complicated and [has] many layers, as many best friend, sister or soulmate friendships can be,” Carden said. “I don’t think they always know what it is, but I think it’s like these inseparable soulmate sisters that have each other’s backs and like want the best for each other and have probably learned some toxic behavior that maybe is not the best for the other one.” 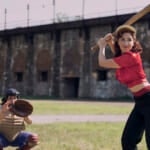 Also Read:
‘A League of Their Own’ Cast Explains How the Series Expands the Scope of the Film by Telling LGBTQ+ Stories

At the end of the day, nothing overtly romantic ever occurs between Greta and Jo, but their bond remains strong.

The two women’s dynamic becomes tested when Jo ultimately gets traded to the South bend Blue Sox for getting caught at a queer nightclub that some of the Peaches stumble upon near Rockford. At the end of the first season, in which the Peaches battle the Blue Sox in the World Series, this plot twist results in another quite physically unexpected moment. Jo hits a home run out of the park to secure the win for the Blue Sox, but when rounding first base, she twists her knee (wounded from getting beat up at the gay bar) and can’t make it around the bases. 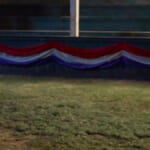 Also Read:
‘A League of Their Own’: Abbi Jacobson and Chanté Adams on Their Characters’ Parallel Storylines (Video)

“It was funny because I was very focused on making sure that I was in the zone because that was an incredibly heartbreaking experience for Jo and I really, really wanted to capture it. I didn’t, I wasn’t thinking about everyone else’s experience, I wasn’t necessarily expecting to look around and see tears in everybody’s eyes, you know, so that was very real for me when we were, you know, walking around the bases. It was just us huddled together, improvising, sniffling. You know, snotting the whole team.”

Carson and Greta first come to Jo’s aid, making eye contact and nodding in silent agreement to pick Jo up and help her round the bases. Carden also weighed in on filming that final baseball scene.

“It was a little meta. We were ending the show, it was one of our last days and Melanie/Jo is like the beating heart of this show,” Carden said. “To see Melanie/Jo in pain or losing her to the other team was hard for all of us. It was like a really special day and we sort of let our emotions get the best of us, which I think is fine and works, but we were really inconsolable that day. It was a good but tough day.” 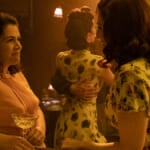 Also Read:
‘A League of Their Own’ Series Co-Creator and Writer Tease Season 2 Plans: ‘There Is Definitely a Lot More to This Story’

“A League of Their Own” is now streaming on Amazon Prime Video.