(Spoilers ahead for the entirety of “American Horror Story: 1984”)

Before I can forget all of this ever happened, I have a laundry list of things that happened in “AHS: 1984” that were super irritating and frustrating to watch, and I feel like I’m gonna go crazy if I don’t try to share this madness with our dear readers. So let’s do this. I have 18 items right now. I’ll probably add some more because I keep thinking of new ones.

1. They forgot to do a climax, as the season finale was really just an epilogue with occasional goofy flashbacks explaining what happened back in the day.

2. Why was Dylan McDermott even in this when his character served no real plot purpose?

3. The Night Stalker (Zach Villa) could not have possibly murdered Mr. Jingles’s wife.

4. Remember when there was a whole thing about Margaret (Leslie Grossman) being a devoted Satan worshipper? They just kinda stopped talking about that.

5. Speaking of Satan, why was he resurrecting the Night Stalker over and over? What could possibly have been the point of that, since he never actually appeared to enact any kind of plan or play any kind of key role in much of anything.

8. In the first episode, they ran into that mysterious 1970 camp counselor (Lou Taylor Pucci) in the road outside camp. Then it was revealed that Margaret killed him in the road. Then all the later episodes established that you have to die within the property line of the camp, which they also establish does not include the road. And yet that guy kept coming back as a ghost like he had died on the property, even though he hadn’t.

10. In the early episodes of “AHS: 1984,” everybody had a story like that, something they were trying to escape by going to Camp Redwood. But none of their character arcs were given any closure so I’m not sure what the point was supposed to be.

11. Steven Culp played Brooke’s dad for one scene — the bloody wedding — and had no lines and was never mentioned again.

12. In the third episode, Chet and Ray fell into a pit filled with spikes. I guess Margaret might have put it there, but until all the murders started happening it sure seemed like she was gonna play it straight with the summer camp. So I don’t know why she would have put a giant spike pit at the summer camp for children.

13. Ditto for the net trap that Brooke gets stuck in.

14. Speaking of which, I don’t understand anything about Margaret. She bought the camp and wanted to do summer camp. But she was worshipping Satan and wanted to do evil things? Literally nothing about that character tracks. Which is saying something for “AHS”

15. At the end of the eighth episode, Mr. Jingles (as a ghost) was killed and woke up next to his dead little brother, who is also a ghost. And then his mom (Lily Rabe) was also there, and she told Jingles: “You brought him back to me, and I am eternally grateful.” I might think she was referring to how he killed her in 1958 and made it so they could hang out as ghosts, but literally one episode earlier she was screaming at him about how she hasn’t seen him since he died.

16. So, uh, why did any of this happen? Why is the camp like that? Everybody just kinda stopped wondering about it. 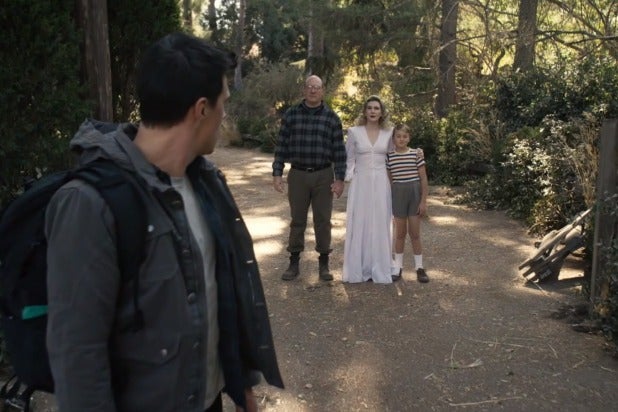 Where does ”Mr. Harrigan’s Phone“ place among the many big-screen adaptations of the horror master’s work?

Stephen King isn't just an author by this point: He's an institution, a legacy of classic horror stories that capture our imaginations, fuel our nightmares, and speak -- when he's at his best -- to our shared experiences as flawed, emotional beings. The best King stories scare so many of us that we all feel connected, and even the worst are usually pretty fun. King's books and short stories quickly became hit movies, many of them celebrated in their time, and some flopped so hard that hardly anybody remembers them. Cataloguing every adaptation might be a fool's errand, so we made some tough choices and decided to focus only on his theatrical releases. And even then, there are so many King adaptations that it gets tricky. The sequels to King's work rarely have anything to do with the source material, so they're all disqualified (even though some, like Larry Cohen's prescient anti-fascist monster drama "A Return to Salem's Lot," are genuinely interesting). We also cut King some slack and removed "The Lawnmower Man" from our watch list, since he fought to have his own name removed from the film and won. (There are also some adaptations that are simply difficult to find in America, like the Indian adaptions of "Misery" and "Quitter's, Inc." -- "Julie Ganapathi" and "No Smoking" -- but we tried. We promise we tried.) Even with all those caveats we felt one particular film deserved a quasi-official, honorable mention. Before we rank into every theatrically-released Stephen King adaptation let's give out one honorable mention...
View In Gallery
x