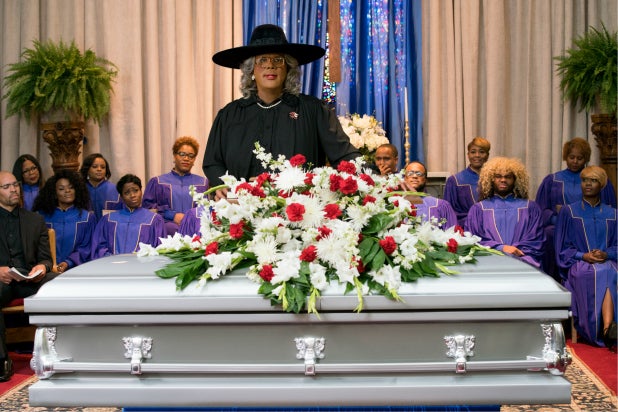 If writer-director-star Tyler Perry makes good on his threat to make “A Madea Family Funeral” the final film featuring his larger-than-life comedic heroine, then Madea will going out with a whimper and not with a bang, even by Perry standards.

When Madea and Uncle Joe (both played by Perry) and their friends Aunt Bam (Cassi Davis) and Hattie (Patrice Lovely) aren’t on screen to harass each other or the younger characters who so clearly need Madea’s wisdom and toughlove, the proceedings grind to a painful halt. And even when that quartet is around, the movie lumbers from one people-in-a-circle-sitting-around-talking scene to the next one. This is Perry’s 21st feature film, and 10th Madea vehicle, and his idea of directing still seems rooted in community theater.

We open on a houseful of characters we’ve never seen before and will only barely get to know, planning a 40th anniversary party for their parents Vianne (Jen Harper, “Greenleaf”) and Anthony (Derek Morgan, “Joan of Arcadia”). Traveling to the party are Madea, Joe, Bam and Hattie, driven by Joe’s upright-attorney son Brian (Perry again, sans latex).

As the out-of-towners arrive at their hotel, they discover that Anthony has had a heart attack while having sex with family friend Renee (Quin Walters, “The Haves and the Have Nots”), which puts a crimp in the anniversary party plans but does allow them all to be around for the impending funeral.

Whether or not Vianne will learn the circumstances of her husband’s death, and what the repercussions will be about Vianne’s older son sleeping with his younger brother’s fiancée, is about all the plot that the movie can muster. But the real draw is Madea, of course, and she gets to be unleashed onto both a family of two-timers and hypocrites and the black funeral itself, a ritual that the movie parodies as overdone and taxingly long.

Perry is clearly having a blast in all that effects makeup: “A Madea Family Funeral” gives him a third older character to play, a leg-less lech named Heathrow who speaks through an electrolarynx; the (often improvised) scenes involving this trio give the film genuine comic spark and energy. And while Perry’s Brian character is a perpetual straight man, the movie finally finds something funny for him to do in a traffic-stop scene in which he insists on compliance while his elders show justifiable concern about dealing with the police.

But when we’re left with the grieving family and their sexual secrets, the movie has the dramatic and visual flatness of a TV soap opera. Director of Photography Richard Vialet appears to have created the first feature film with motion smoothing, and the rest of the cast makes little impact, except for Davis, who’s always game to yes-and Madea, and Harper, who gets a third-act monologue that demonstrates what this movie might have been had Perry not been phoning it in as a screenwriter.

Anyone who’s ever seen a Perry play on stage will recognize the film’s climax, in which the characters all sit around (once again, in a circle of couches) while Madea delivers life advice and homilies, a cue for the audience to gather their coats and purses and get ready to go home.

In films like “Vice” and “Gone Girl,” Perry has shown himself to be an exceedingly capable character actor in other directors’ movies. One can only imagine the heights he could reach with his single greatest creation, Madea, if he were to allow someone else to write and direct a comedy for her. “A Madea Family Funeral” is being touted as her last on-screen outing, but since that’s not her in the casket, hope springs eternal.