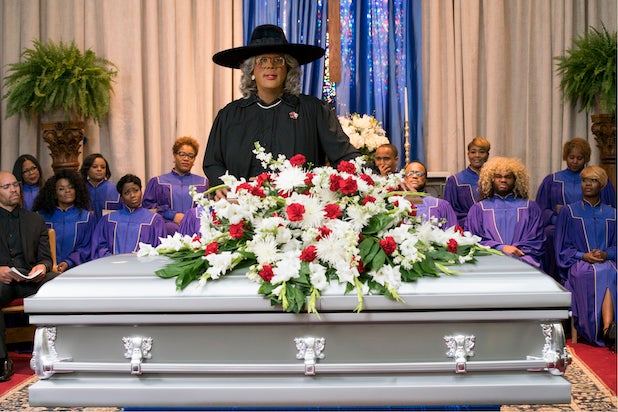 With “Captain Marvel” coming out next weekend, most studios are steering clear of releasing any films that could get caught in the Marvel movie’s undertow. The one studio that is putting out a new film this weekend is Lionsgate with “A Madea Family Funeral,” the tenth and final film in Tyler Perry’s long-running “Madea” series.

First imagined by Perry for his 1999 play “I Can Do Bad All By Myself,” Madea was brought to the big screen in 2005 with “Diary of a Mad Black Woman,” a film made on a $5.5 million budget that grossed $50 million at the box office. Since then, Madea has been a dependable, low-budget moneymaker for Lionsgate, as the character has grossed a combined $547 million at the domestic box office.

But over the past few years, diminishing returns seem to have set in. The series peaked in 2009 with a $41 million opening and $90 million domestic total for “Madea Goes to Jail,” and “A Madea Family Funeral” is projected for an opening weekend tally of $18-20 million from approximately 2,400 screens.

“A Madea Family Funeral” sees Madea return to Georgia for yet another family reunion, which ends up going so bad that she ends up having to plan an unexpected funeral. Along the way, unsavory secrets arise that threaten to split up the family for good. As with all installments in the series, the film is written, directed and co-produced by Perry, with longtime series co-stars Cassi Davis and Patrice Lovely also joining the cast.

Also opening wide this weekend is Focus Features’ “Greta,” a thriller starring Chloë Grace Moretz as a young woman who returns a purse found on a New York City subway to a seemingly kind, but lonely woman named Greta (Isabelle Huppert). But after the two grow close, the woman realizes that Greta is not as nice as she may seem and may be hiding something sinister.

Directed and co-written by Neil Jordan, “Greta” is projected for a $6 million opening. It currently has a 70 percent score on Rotten Tomatoes.

Meanwhile, some of the winning films from this past Sunday’s Oscars will see their screen count expand as studios look to capitalize on the publicity for one last box office burst. Universal will expand its Best Picture winner “Green Book” back to 2,600 screens, close to the widest screen count of 2,648 screens that the DreamWorks/Participant Media production had a month ago. The film has grossed $144 million worldwide against a $23 million production budget.

Sony is also expanding “Spider-Man: Into the Spider-Verse” after an awards season in which it dominated the animation field en route to the Best Animated Feature Oscar. The Marvel movie is returning to 2,350 screens having already grossed $185 million domestic and just under $360 million worldwide.