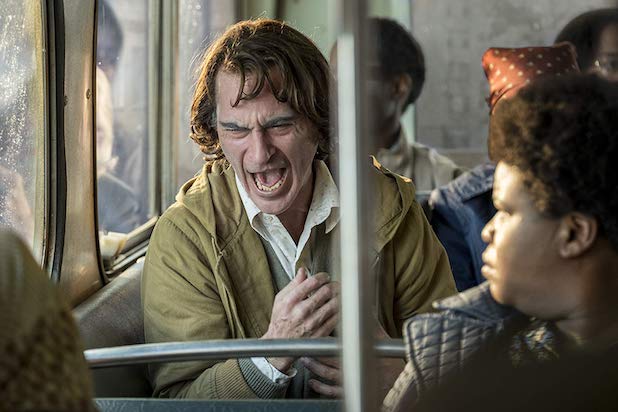 Before the North American premiere of his film “Joker” at the Toronto International Film Festival on Monday night, director Todd Phillips sounded a cautionary note for the fans who packed Roy Thomson Hall.

Well, yeah, it sure the hell is. Two days after winning the Golden Lion from the jury at the Venice Film Festival, “Joker” hit another festival and left the audience shaken with the astounding portrayal of madness delivered by Joaquin Phoenix in the title role.

But Phillips’ warning could apply to awards voters, too. The Golden Lion has been a pretty good indicator of Oscar potential over the last couple of years, with “The Shape of Water” winning two years ago and “Roma” taking the prize last year.

But if “Joker” makes it three-for-three by landing its own Best Picture nomination, it’ll be the darkest nominee in the category since … what? “There Will Be Blood” in 2007, maybe?

From its garish opening shot to its apocalyptic finale, “Joker” is DC Comics refashioned as “Taxi Driver” if Travis Bickle worked as a clown, not a cabbie. The city — Gotham City, of course — is as squalid as the New York of Martin Scorsese’s early films, and every bit as likely to erupt into violence.

Everything about this world is dirty or depressing or scary. Even the talk-show host who serves as Gotham’s version of Johnny Carson is automatically creepy because he’s played by Robert De Niro. (You know Phillips chose De Niro precisely for the baggage he brings.)

As for Phoenix’s Arthur Fleck, he’s both the victim of this environment and its ultimate product. This is a guy who becomes more confident, more articulate and a better dancer once he starts killing people, and Phoenix makes every step of the transition riveting. In what should be a crowded year in the Best Actor race, he’s making a strong case that there’s room for a comic-book movie alongside a list that includes Adam Driver in “Marriage Story,” Antonio Banderas in “Pain and Glory,” De Niro in “The Irishman” and Leonardo DiCaprio in “Once Upon a Time in Hollywood.”

The Toronto premiere definitely reinforced the awards potential for Phoenix’s performance, while leaving open the question of whether voters will embrace the sheer majesty of the film’s dark world view.

But make no mistake, this one should be in the race for the long haul.

In a Q&A that followed the Toronto screening, Phillips said the idea was to make “an in-depth character study, to take a deep dive” into a celebrated character without being tied too closely to the DC comics canon. “It’s not really connected to that universe,” he said. “It was never meant to connect, and I don’t see it connecting in the future.”

Phillips added that he wrote the part for Phoenix, but that persuading the actor to actually take the role was a lengthy process. “It wasn’t an easy decision at first,” Phoenix said. “Honestly, I didn’t f—ing know. But there was something that interested me, and it evolved (into) one of the greatest experiences of my career.”

And for those who think this film must represent a new career strategy for the director whose previous films include “Old School,” “Starsky and Hutch” and the “Hangover” trilogy, he insisted that wasn’t the case.

“I like working with great actors,” said Phillips, who then turned to Phoenix and patted him on the knee. “I’d do anything with him. I want him to be in ‘Hangover 4.'”

TheWrap at the 29th annual gay and lesbian film festival