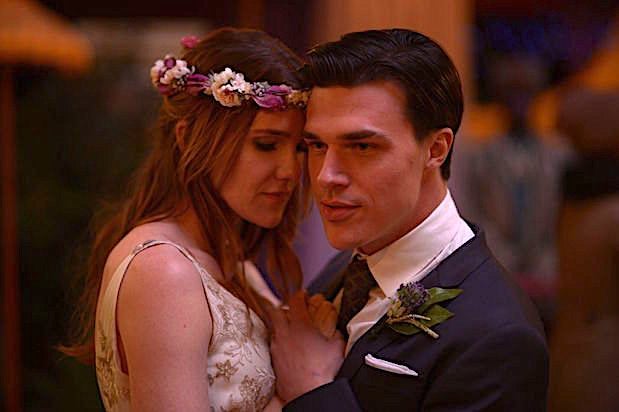 The irony, of course, is that by making Shakespeare “modern,” the films end up more dated than the plays. “Romeo and Juliet,” the Shakespeare play, remains as timeless and important as ever. Baz Luhrmann’s “Romeo + Juliet,” the hyper-kinetic music video-inspired 1996 film, feels like a relic of the 1990s. The lesson we can extract is that Shakespeare’s words speak for themselves, so filmmakers have to take extra care when inserting new context.

Which brings us back to “A Midsummer Night’s Dream,” a new adaptation of The Bard’s classic comedy, directed and scripted by Casey Wilder Mott. This new version frames the action as an ambitious but naive film school project, which sounds pretty clever until you realize that, even if the film succeeds, it’s still going to feel like an ambitious but naive film school project.

In Mott’s version, acting superstar Hermia Puppet, aka “H-Pup,” and her photographer lover Lysander decide to elope over text messaging. It’s hard to tell if it’s funny or tragic when she writes him a beautifully worded message, complete with proper spelling, grammar and punctuation, and then deletes it for an animated “Thumbs Up” emoji. Their car breaks down and they wind up wandering through what looks like Griffith Park, with talent agent Demetrius and screenwriter Helena hot on their tail.

Along the way they run afoul of mega-stoners Puck (Avan Jogia, “Ghost Wars”) and Oberon (Saul Williams, “Lackawanna Blues”), who are in the midst of a scheme involving powerful love potions. Oberon orders Puck to use this love potion on his wife, Titania (singer/songwriter Mia Doi Todd), so she’ll fall madly in love with an ass of some kind, and also to use it on Demetrius, in order to cut poor Helena some slack. Puck screws up, gives the potion to Lysander instead, and now everyone’s in love with Helena and it’s super-duper awkward.

Meanwhile, a film student named Quince (Charity Wakefield, “The Player”) tries to direct an adaptation of the romantic tragedy “Pyramus & Thisbe,” starring the egotistical and untalented Bottom (Fran Kranz, “Much Ado About Nothing”) in the lead role. He wanders off in the woods and Puck, having apparently just watched that one Ben Affleck episode of “South Park,” turns his head into a butt. It farts a lot. Titania falls in love with him. He farts some more. It’s not very funny.

Setting “A Midsummer Night’s Dream” in the madcap world of movie production isn’t, in itself, a poor idea. It is a story of egos and obsessions and, off the to the side, amateur thespians and directors. But the run-and-gun film school aesthetic of this particular version makes all the glamor of Hermia’s big Hollywood lifestyle seem unbelievably small, even if gag posters of blockbuster films like “The Rest Is Silence” — modeled after “The Silence of the Lambs” — are kinda funny.

So much of “A Midsummer Night’s Dream” takes place with the actors wandering around lightly wooded areas, with oppressive red or purple lights shining in everyone’s faces, that it can’t help but look cheap and amateurish. It’s hard to tell if that’s a function of the film school backdrop, or if the film school backdrop is an attempt to make the most of the film’s budgetary restrictions. Either way, again, it looks like a film school project made with a lot of heart, and a lot of passion, and not a heck of a lot of skill.

It falls to the performers to make the most of this material, and some of them are up for the task. Lily Rabe, Hamish Linklater, Charity Wakefield and Saul Williams make Shakespeare’s language seem natural, humorous and refined. The other stars less so, and to varying degrees. This new “A Midsummer Night’s Dream” is unlikely to become any high school drama teacher’s go-to DVD for a rainy day.

And of course, the trick with any “A Midsummer Night’s Dream” production is the play’s unusual structure, which wraps every loose end up and then continues as the characters themselves watch another, humorously terrible show. Casey Wilder Mott’s cleverest observation about the text is that “Pyramus & Thisbe” was arguably the prototype for Tommy Wiseau’s “The Room,” a production so earnestly terrible that it’s unintentionally hilarious.

“A Midsummer Night’s Dream” closes with Puck telling the audience that if they didn’t like the show, they should just imagine that they fell asleep in the theater and dreamed all these weird shenanigans themselves. It’s a smart way to stave off criticism but, in movie lingo, falling asleep in the theater is probably the harshest criticism of all. Despite the film’s good intentions it’s an underwhelming adaptation of Shakespeare’s play, with cute side gags that make more of an impression than the characters or the story.