We’re not sure what Ubisoft expected when it announced “Avatar: Frontiers of Pandora,” on Saturday, but a ton of jokes at the new game’s expense probably wasn’t it.

The Canadian video game giant’s announcement came during its E3 2021 presentation on Saturday. But the response to a new game based on the James Cameron movie and, presumably, its upcoming sequels, is less “I see you” and more “hard pass.”

In fact, it got a lot of fans thinking about “Avatar: The Last Airbender” instead. 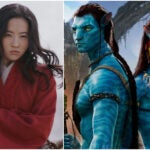 But it wasn’t just references to the beloved animated series with a similar name. Quite a lot of people questioned why the game is even being made at all.

Of course, plenty of people had jokes about some of the uh, grosser elements of the “Avatar” universe… and the video game industry.

Here is the game’s official logline from Ubisoft: “In this new, standalone story, play as a Na’vi and embark on a journey across the Western Frontier, a never-before-seen part of Pandora. Explore a living and reactive world inhabited by unique creatures and new characters, and push back the formidable RDA forces that threaten it.”

And if you’re so inclined, here’s the trailer:

“Avatar: Frontiers of Pandora” will be released on games consoles in 2022.