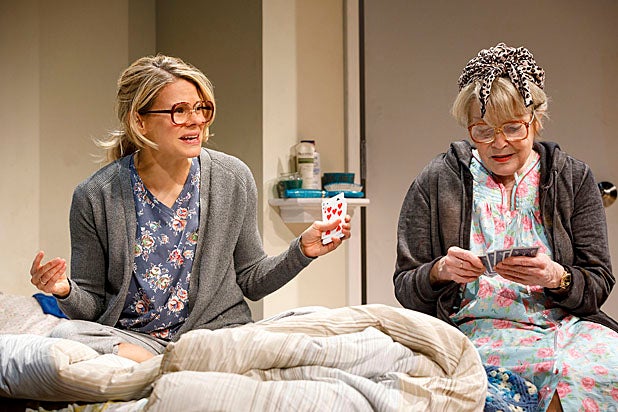 I saw the Los Angeles premiere of Bruce Norris’s “A Parallelogram” four years ago, and remember almost nothing about it. Having just seen the first New York production of this gently nihilistic comedy, which opened Wednesday at Second Stage, I think I’ll never forget it.

Like Norris’ wonderfully mad heroine Bee (Celia Keenan-Bolger), perhaps I’m living in a parallelogram, having experienced the same play in different planes of time and space. (It’s doubtful this is the way Norris would describe a parallelogram. You need to see the play to get a much more cogent definition.)  The major difference between Bee and most of us is that she’s cursed with an older version of herself (Anita Gillette) who keeps telling her what will happen in the next 60 seconds, if not the next few decades of her life. In this sense, “A Parallelogram” is a lot like the Midas Touch and other ancient fables that teach us how our fondest dream can turn into a living nightmare.

Unlike most plays about madness, “A Parallelogram” takes us inside the lead character’s feverish mind to reveal the logic of hallucination and how lucid it can make a person. Bee’s knowledge of the future does not give her the ability to change her life, she learns, except in the most insignificant ways. Extrapolating that nihilism outward, she finds that she’s grossed out by childbirth and young children, and, truth be told, is not really affected by mass deaths on the other side of the world or, for that matter, the Holocaust and 9/11. It’s with her mention of these latter catastrophic events that Norris shows his true bravery as a playwright. It’s the older Bee’s casual rant here that separates the curmudgeons in the audience from the true misanthropists. And the younger Bee’s total disgust at a nearly born baby (“a living turd”) is equally breathtaking in its negativity.

Keenan-Bolger’s gift as an actress is to keep her façade abnormally placid while revealing what’s just below the surface, as well as what’s wrenching her gut. Michael Greif’s direction pairs her beautifully with Gillette, who personifies not a disgraceful version of Bee’s older self but someone who is definitely a deep disappointment to the younger Bee. Equally effective is Keenan-Bolger’s pairing with Stephen Kunken, who plays Bee’s first boyfriend. Kunken is asked to repeat his character’s actions, often three or four times a la “Groundhog Day.” He does this was astounding precision, but also gives the impression that he’s as unaware of what’s going on as Bee is hyper sensitive to everything around her – past, present, and future.

For Bee, life turns out to be so much less than what she wants it to be, and Norris leaves her trapped by that knowledge. But he gives her moments. Bee’s subsequent boyfriend is played by Juan Castano, and his brief half-naked saunter across the stage after showering lets us know that their sex together is great. They won’t remain together for long, but while he’s there, she’s getting laid in a spectacular way. “A Parallelogram” is like that. In the end, its message is a downer, but the play is thrilling to watch while it’s there in front of us.