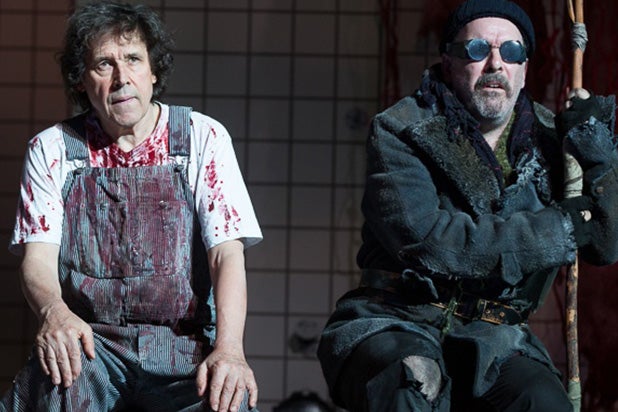 Sam Shepard tells two stories in his new play, “A Particle of Dread (Oedipus Variations),” which opened Sunday at the Pershing Square Signature Center. One story, obviously, has to do with Oedipus; the other story is more on Shepard’s turf: A husband and wife read about a murder spree in the Mojave Desert, and go to investigate the crime scene.

The least interesting aspect of this fascinating play, which had its world premiere last year in Northern Ireland, is that Stephen Rea, who plays the husband Otto, also plays Oedipus. The wife Jocelyn is played by Brid Brennan, who also plays Jocasta. And the daughter Annalee, whose husband has murdered the babysitter, is played by Judith Roddy, who also plays Antigone. The Greek chorus has been reduced to one actor, Lloyd Hutchinson, who plays characters called the Traveler, the Maniac, and someone named Uncle Del.

Alliteration is nice, but if Shepard is going to go this route, wouldn’t the contemporary match for Oedipus be better named Eddie?

That snarky quibble aside, “A Particle of Dread” is most haunting when it keeps its audience off-balance, and doesn’t clue us into where it’s going with his parallel stories, which merge in a comic nightmare that sees Otto/Oedipus trying to get to the bottom of the crime by talking forensics, paint chips, and DNA with a cop (Jason Kolotouros) and an expert investigator (Matthew Rauch).

Does it make sense? No, but dreams and madness rarely do, and Shepard’s poetry and his wild juxtaposition of ancient royalty and modern-day desert manners involving illegal aliens, drugs, and dead babysitters is hallucinatory.

Rea may be the first Oedipus to play the role in blood-spattered overalls, and he deftly handles Shepard’s freewheeling segues from tragedy to slapstick and back.

The playwright’s frequent director Nancy Meckler is at the helm and has chosen to set “A Particle of Dread” in what looks like an insane asylum, designed by Frank Conway. Sometimes you have to wonder if people who work in the theater ever go to see other peoples’ work in the theater. That sterile white-tile room has now been used at least twice on Broadway in recent seasons, as the looney-bin environment for two stagings of “Macbeth,” starring Patrick Stewart and Alan Cumming, respectively. Effective, however, are the red tapestries that resemble animal entrails and hang in front of a small string combo that strikes ominous chords at key moments in the drama.

“A Particle of Dread (Oedipus Variations)” is presented by the Signature Theatre and Field Day, and runs through January 4.

“X-Men: Days of Future Past” stars mug it up in the Big Apple to commemorate their Broadway runs in “No Man’s Land” and “Waiting For Godot”

It's hard not to get caught up in Patrick Stewart and Ian McKellen's wave of enthusiasm as they tour around New York.
View In Gallery