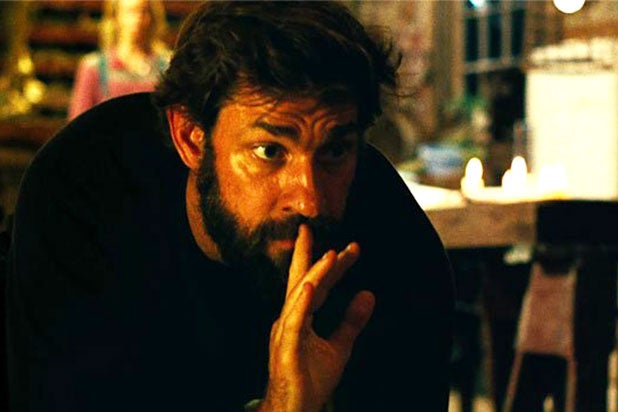 Paramount’s “A Quiet Place” has taken back the No. 1 spot from “Rampage” this weekend, earning a third weekend total of $21.8 million. That pushes the horror film’s domestic total to $132 million, higher than the North American run of “Transformers: The Last Knight,” and making it Paramount’s highest grossing domestic release since “Star Trek: Beyond,” which made $158.8 million in summer 2016.

“Rampage” will take second this weekend, pulling away from some unexpected competition with $9.1 million in its second Saturday, an 82 percent bump from Friday. Matinee screenings were a big boost, and the WB/New Line film is now estimated to make $20.3 million in its second weekend, just a 43 percent drop from its $35.7 million opening and giving it a 10-day total of $65.9 million. Internationally, the film continues to be a big hit in China, where it has a total of $106 million and a global total of $283 million.

In third and fourth are this weekend’s two new comedy releases, STX’s “I Feel Pretty” and Fox Searchlight’s “Super Troopers 2.” “I Feel Pretty” has slowed down slightly with $6 million made on Saturday, bringing its estimated opening to $16.2 million from 3,440 screens. That’s still slightly higher than pre-weekend projections, but lower than the $19.5 million start made by Amy Schumer’s last film, “Snatched.”

STX’s last comedy, “A Bad Moms Christmas” opened to $16 million back in November and went on to leg out a $72 million domestic run. But it will be a tough road for “I Feel Pretty” to post similar results, as it tries to serve as comedy counter-programming against the likes of “Avengers: Infinity War” in a blockbuster-filled May. “A Bad Moms Christmas” only dropped 31 percent in its second weekend with $11.4 million, and “I Feel Pretty” will likely have to keep its drop off at 50 percent or less to reach a domestic run of over $50 million.

Also Read: 'I Feel Pretty' and the Long History of 'Sexy Baby' Voice on Screen

“I Feel Pretty” earned a B+ on CinemaScore and 35 percent on Rotten Tomatoes (RT). The film was produced by Voltage for $32 million and acquired by STX for $15 million.

“Super Troopers 2” is in fourth with an estimated $15 million, but is in a much better spot financially with a $5 million budget and pre-weekend projections of $8-9 million. This sequel to the 2001 cult film has brought fans of the original back to theaters, earning a B+ on CinemaScore and a 33 percent RT score.

Universal/Blumhouse’s “Truth or Dare” takes fifth place this weekend with $7.9 million, giving it a 10-day total of $30 million. Lower on the charts, Lionsgate’s thriller “Traffik” opened on 1,046 screens and made $3.9 million.

Finally, “Black Panther” pushed its domestic total to $681 million on the final weekend before “Avengers” arrives in theaters worldwide on April 27. It also has a global total of $1.32 billion, putting it on the verge of passing the global run of “Star Wars: The Last Jedi.”

Meanwhile, it has been joined by “Ready Player One” as one of only two films so far this year to gross over $500 million worldwide. It is also the first Steven Spielberg film since “Indiana Jones and the Kingdom of the Crystal Skull” to reach that mark, with a domestic total of $126 million, a Chinese total of $207 million, and a global count of $521.6 million.