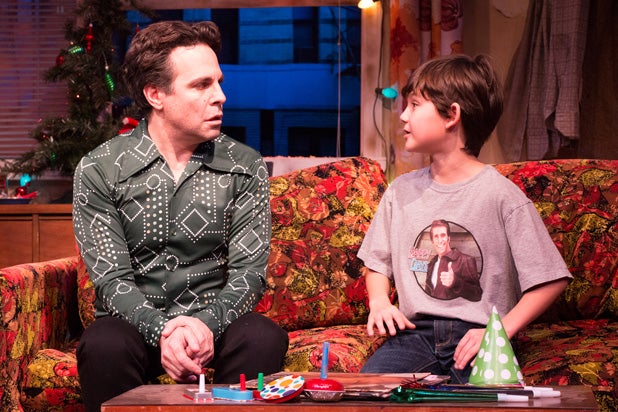 Among the many eye rolls, the strained neck muscles, the foul mouths, and the hammered vocal cords, you might mistake Joli Tribuzio for Mario Cantone in drag in the opening moments of “A Room of My Own,” which opened Thursday at Off Broadway’s Abingdon Theatre.

Cantone headlines the new play by Charles Messina, so you’re expecting him as soon as the curtain goes up. Cantone shows up much later in the role of Tribuzio’s brother, playing Jackie to her Dotty. In film and theater, there’s often a necessary suspension of disbelief when it comes to accepting two actors as blood relatives. Tribuzio and Cantone don’t require it — not for a second — and better yet, her Dotty is one of those great monster mothers who pop up in the theater from time to time. Amanda Wingfield, Mama Rose, and Violet Weston can welcome Dotty Morelli to their club.

Dotty works a cash register, skimming a few dollars every day to keep her family of four going. She steals to get her two kids Christmas presents. And she and her jovial deadbeat husband, Peter (the excellent Johnny Tammaro), gamble because it’s the only way they think they’ll ever get ahead. She also tells one major lie about a windfall of money.

That big check is not unlike the one in “A Raisin in the Sun” when it comes to money’s transformative powers. And frankly, the Morellis need it more than the Youngers. The sleeping arrangement in Lorraine Hansberry’s classic is downright luxurious compared to Messina’s studio abode in a Greenwich Village tenement circa 1979.

Under the playwright’s own top-notch direction, the family’s cramped circumstances are not immediately evident. Messina carefully calibrates our discovery that there’s not one but two children (Kendra Jain, Nico Bustamante) sleeping in what looks to be a kitchen/living room situation. It’s not until much later that the father gets into the fold-up bed with his son and the mother gets into bed with her daughter. Actually, it’s not a bed. It’s a beat-up sofa.

Despite this poverty, the Morellis are also funnier than the Youngers. Much funnier. They even have no respect for the nun at the school who’s hounding them for the kids’ overdue tuition. Suffice to say that no one’s sexual orientation is off the table, and Dotty knows precisely where to shove the good sister’s crucifix, as she repeatedly makes clear. The noise level hits truly jack-hammer decibels when Cantone’s Jackie arrives from his upstairs apartment to join the fray, his major disciplinary tactic being to bribe his niece and nephew into doing what he wants.

For all its life and energy, “A Room of My Own” is one of those 90-minute plays that needs an intermission and another half hour. The long-lost relative (Liza Vann) who delivers that big check of money comes off as a device and not a character, unfortunately.

Messina also frames his play with a narrator (Ralph Macchio), who is the adult son looking back at his dysfunctional family. He interacts now and then with the other characters. Macchio plays the character as written. The only problem is, how did that smart, resilient, traumatized, cursing little kid played by Bustamante (a fine child actor) turn into such a sweet, good-natured, and unimaginative adult?