A big stand-out moment in Marvel’s “Shang-Chi and the Legend of the Ten Rings” is a lengthy action scene in which Shang-Chi has a martial arts battle on an out-of-control public transit bus speeding through the hilly streets of San Francisco.

In context it’s a pretty thrilling scene, but people who’ve spent any time at all in San Francisco probably noticed the scene, at best, has a merely casual relationship with the city’s actual geography.

What you might not have noticed is all the other things the scene got wrong, specifically about the actual mechanics of a typical city bus, not to mention the way bus drivers are actually expected to act during an emergency.

If that stuff matters to you, you’re in luck. Over the weekend, an actual San Francisco bus driver, Mc “Mack” Allen and known on Twitter as @that_mc, watched “Shang-Chi” and broke down everything wrong with the scene, from a realism perspective. 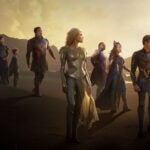 • The bus had a real advertisement for a local blues and jazz festival.

• The bus driver would probably get fired in real life for wearing earbuds while driving, as the movie’s bus driver does, and all the damage done during the fight could be blamed on him for it.

• Also, he was pumping the brake when he should have used the actual emergency brake built into buses.

• The route used by the bus in the film would have taken at least an hour to traverse in the real world.

• The bus driver should have been using his mirrors to look behind him, not turning his head.

There’s plenty more fun stuff, including some good jokes, and we recommend you read the whole thing, which we’ve embedded below in full. Also, we’ll cosign Mack’s send off — people should definitely take advantage of public transit every chance they can.