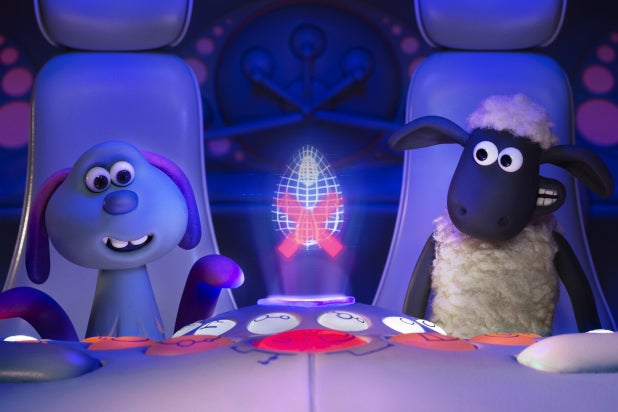 Woolly hero Shaun the Sheep has bleated through many an adventure over several seasons of his own TV series and an Oscar-nominated film, so finding a new, large-canvas escapade for one of Nick Park’s most cherished creations meant searching beyond the confines of Mossy Bottom Farm, or even the planet, and into outer space.

Hopping back onto the big screen (as well as the small one since, stateside, it’s a Netflix release), the ovine movie star has a close encounter of the third kind in “A Shaun the Sheep Movie: Farmageddon,” a quick-witted and uproarious homage to the sci-fi genre like only the stop-motion geniuses at Aardman Animations could imagine and handcraft.

Everyday sheep-nanigans for Shaun (voiced by bah expert Justin Fletcher) and the flock — including but not limited to pulling wild stunts that upset strict sheep dog Bitzer (John Sparkes provides the barks and grunts) — take a turn for the extraterrestrial when a spaceship lands nearby and a UFO craze possesses locals and tourists. Chaos ensues for our rejoicing.

Mark Burton (co-director of 2015’s “Shaun the Sheep Movie”) reunites with this rowdy bunch of characters as the screenwriter of “Farmageddon” in tandem with fresh collaborator Jon Brown, as a new duo, Will Becher and Richard Phelan, who previously worked in a variety of departments on productions at the studio, make their fluffy feature directorial debut.

Expanding the property to an appropriately larger scale — it’s not a “War of the Worlds” type epic but a comedic Shaun take on easily identifiable tropes — the team scores higher on clever cheekiness than on radical originality. That’s where the brilliance lies, of course: We anticipate most of the broad-stroke story beats but don’t know how these will mutate in the Aardman context. Their superpower is cultivating kids-friendly satire on familiar ground.

Lu-La (Amalia Vitale), the blue, bunny-like alien with an appetite for pizza, candy, and sugary drinks who Shaun unexpectedly befriends, and Agent Red, a misunderstood villain ridiculed as a child for believing in interplanetary beings, are two unique ingredients added here to the tried-and-true equation. Adorable Lu-La, whose talent for mimicking others’ sounds makes for sweet silliness, yearns for home, making her safe return Shaun’s mission, same as Elliot’s in “E.T. the Extra-Terrestrial.”

Also Read: 'Klaus' and Netflix Dominate at the Annie Awards

To great success, other Aardman movies such as “Chicken Run” or “The Pirates! Band of Misfits” elicit laughter partly from irreverent lines. However, Shaun’s never sheared of his signature slapstick humor, thanks to the filmmakers’ commitment to not relying on intelligible dialogue. There’s just enough text on Farmer John’s newspapers and conspicuously placed signs to advance the plot with clarity.

Sight gags galore, plus a swift cameo from Wallace & Gromit, populate the dynamic landscape that characterizes the company’s style. Not even the most miniscule production design element is left to chance in such a tangible and meticulously conceived technique like stop-motion. Details matter, and comedy often emerges from them combined with great timing. “Farmageddon” is a non-verbal narrative that tells jokes directly to our curious eyes.

This method of deriving hilarity from a combination of what’s on the foreground and the touches that require a closer look carries over to Farmer John’s impromptu theme park, designed to profit from gullible visitors eager for a paranormal sighting — which is closer to an overpriced sideshow — and to the secret base where henchmen in hazmat suits carry out absurd experiments.

Even more entertaining is keeping track of the copious tributes to classic sci-fi shows and movies, from “Signs” to “Doctor Who,” “The X Files,” and “2001: A Space Odyssey,” the latter honored with a piece of burnt toast near a jar of Roswell jam. Repeated viewings are recommended for full appreciation of the richness in references hidden all over.

CG enhancements to the world feel more prominent than in the previous installment, since giant robots and the spaceship that brings Lu-La to Earth benefit from the blend of the physical with the digital. Far more jarring than any visuals are certain music cues and their sudden placement within scenes, particularly in disheartened moments. It’s a minor flaw, probably in response to a fear of seeming less frantically energetic than other animated products out there. Aardman doesn’t need to fit that model, as their stories aim for timelessness.

Seriousness isn’t part of their brand, but in a post-Brexit United Kingdom and a world nose-diving into isolationist nationalism, the political significance of children’s content showing a countryside sheep becoming pals with a foreign visitor shouldn’t be dismissed as unintentional. Lu-La looks different than anybody Shaun knows, she speaks a different language, and is being hunted down, yet she shares the same intrinsic need for security and closeness. That’s something even rigid Bitzer, a rule-abiding figure, can agree on.

Leave it to Shaun not only to make the Brits (and the rest of us) chuckle but also to reinforce lessons on basic humanity trough the conceit of genre cinema.