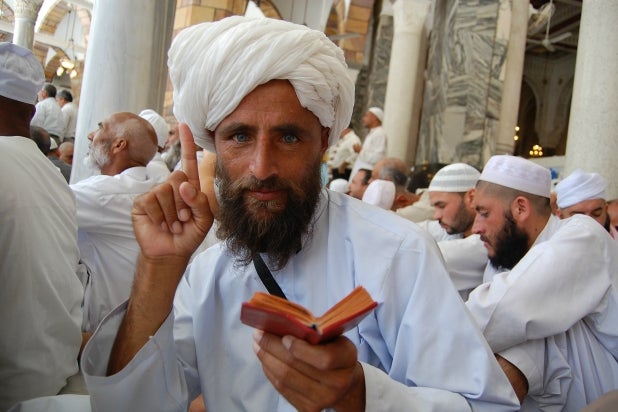 Parvez Sharma’s mother just wanted him to settle down with a nice girl. Like many moms, she felt her son was errant, and wished that he’d change his ways. Sharma’s “ways,” however, was her euphemism for his homosexuality. And that wasn’t about to be changed.

“A Sinner in Mecca” is Sharma’s self-directed documentation of his struggle to reconcile his sexuality with his devout Muslim beliefs and to assuage the guilt he feels over having been estranged from his mother when she died. “Did the shame of my sexuality kill her?” he wonders.

Obviously, this is a burden more intense than feeling bad because he didn’t visit enough.

In an attempt to alleviate his immense inner turmoil, Sharma decides to go on his hajj, or the sacred pilgrimage all Muslims must take once in their lives if they have the means. Many aspects of “A Sinner in Mecca” are therefore fraught, including an opening scene in which Mo, a Saudi acquaintance, asks for Sharma’s help to leave the country after witnessing the beheading of a homosexual man.

The most dangerous circumstances, however, come from Sharma deciding not only to travel from New York to Saudi Arabia as an openly gay man but also to film his hajj, which is strictly forbidden.

So why does “A Sinner in Mecca” seldom feel like a matter of life or death?

Sharma continually wears a trepidatious look on his face, but neither his fearful expression nor an early fantasy scene of him bathing in blood projects. Commerce also contributes to making these proceedings seem less threatening: First, Sharma’s video recorder overlooks the Kaaba — the House of God, i.e. the holiest place in Islam — with more than a million pilgrims circling it as they must for their hajj. It’s a remarkable sight. After Sharma notes that there’s “nothing kind” about this strenuous process, we see him on an escalator: “Making my way to the Starbucks upstairs, see if I can get a nice cup of joe.”

Turns out that one of the largest malls in the world stands a mere 1,000 feet from God’s house. Muslims can’t be gay, but they can apparently worship capitalism.

Sharma’s hajj reflects the energy-draining, physically punishing requirements of the journey. “You just walk, and you walk, and you walk,” he says. His feet bloody and his body wearies. Sharma’s “hajj of defiance” has turned into a hajj of endurance.

He occasionally broaches the topic of how a minority of Muslims have “hijacked” Islam and turned violent in its name. The prophet Muhammed, he says, was peaceful and wouldn’t be pleased with their terrible actions.

But what about his goal of proving that one can be both a good Muslim and gay? Well, Sharma’s sexuality doesn’t really factor into his actions — his husband stays behind in New York — though he does ask Allah for general forgiveness. Every time you hear him say “God is greatest,” however, you wonder how he can still think that when other Muslims would execute him if they knew his secret. As far as traveling as an “openly” gay man, it seems all but impossible for others to tell. Also, we never find out what happens to Mo.

And what about Sharma’s documentation? Regarding his bootlegging, a few eagle-eyed pilgrims spot his camera and say, “Forbidden!” But that’s about it. Guards don’t bother him; the naysayers scold, then move on. After his previous film, “A Jihad for Love,” was released, Sharma was labeled an infidel. That seems to have zero consequences while he’s in Saudi Arabia, though you imagine that the idea of Westerners seeing video of a hajj will anger Muslims as much as a same-sex romance would.

Sharma then contradicts himself, specifically concerning the outcome of his hajj, near the end. It’s disappointing — as is the film as a whole, aside from its unique presentation of all steps of the pilgrimage — and made more so with banalities such as “After the hajj, Muslims leave Mecca, but Mecca never leaves them.”

Then suddenly, a leap in thinking: “It is up to me, as a gay Muslim, to accept Islam.” There’s no logic that leads to this revelation, and it too contradicts thoughts Sharma expressed beforehand. The most compelling parts of “A Sinner in Mecca” turn out to be early footage of his wedding and exchanges with his husband. But when an infidel makes a film about traveling to an Islamic country that doesn’t accept his way of life, you expect a little more tension.