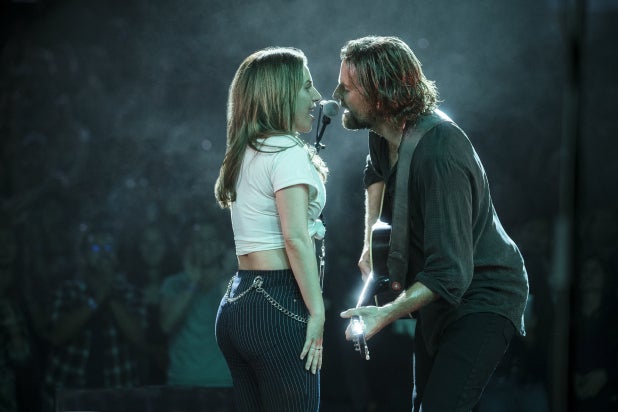 For all the reasons that a fourth iteration of “A Star Is Born” — fifth, if you count the 1932 drama “What Price Hollywood?” whose DNA is in every “Star” — shouldn’t and wouldn’t work in 2018, it’s an extraordinary surprise that this new version packs such a wallop.

This is “A Star Is Born” for people who never saw a previous version, for people who love any of the previous versions, and even for those who think the property is moth-eaten and old-fashioned. This is “A Star Is Born” that takes the characters seriously, in their passions and pathologies, their addictions and ambitions. And in an age where “Mamma Mia” and “The Greatest Showman” pass as hit musicals, it’s an exciting reminder of what the genre can be.

You know this story, but you don’t this story, at least not the way that screenwriters Eric Roth, Will Fetters and Cooper are telling it: Jackson Maine (Cooper) is a roots-rock icon whose personal life is falling apart from too many pills, too much booze, and too fraught a relationship with his brother and minder Bobby (Sam Elliott). (The fact that Cooper’s speaking voice as Jackson seems to impersonate Elliott’s is distracting at first, but it later becomes a plot point.)

After a gig, Jackson heads to the first bar he can find, which happens to be a drag joint. He’s blown away by Ally (Lady Gaga), the one performer in the club who doesn’t lip-sync, belting out a heartfelt “La vie en rose” that’s more Piaf than Grace Jones. The two get to know each other on a bar-crawl: She punches a cop who violates Jackson’s personal space, he takes her to an all-night grocery store to get frozen peas for her swollen knuckles, she regales him in the parking lot with a song she’s working on.

The next night, she finds herself on stage with Jackson, who has worked her fragment into a full song, and wouldn’t you know it: A star is born. But her climb is mirrored by Jackson’s descent, and not even her abiding, clear-eyed love (Ally may be the least enabler-y of the “Star Is Born” heroines) is going to be enough to save him from his own abyss.

Over the years, “A Star Is Born” has been a Hollywood story (the 1937 version starring Janet Gaynor and Fredric March), a Hollywood musical (1954, Judy Garland and James Mason), and a rock musical (1976, Barbra Streisand and Kris Kristofferson). This new version hews closest to the plot of the most recent remake, but there are bits of the others scattered in as well. (When Ally talks about being rejected because of her nose, that’s not just a Streisand shout-out; Garland’s character is told by the studio makeup men that “[her] nose is all wrong.”)

But throughout the course of the film, Cooper goes out of his way to update, change or at least reconsider what we expect as the plot beats of the story. Jackson does embarrass Ally at an awards ceremony, yes, but not in the exact way his predecessors do. We don’t have to see an on-the-decline Jackson screw up a corporate gig; the lead-in to the scene tells us exactly what’s going to happen, and we can fill in the rest ourselves. Kudos to the sound designers as well; “A Star Is Born” is that rare film to acknowledge that a rock concert sounds different to the people onstage than it does to the ones in the audience.

Cooper and Lady Gaga are dynamite together; this is a story that lives and dies by the central relationship and the instant chemistry that must blossom between them, and these two have it in spades. The musical numbers take immediately catchy songs and present them in an electrifying way; I rate Garland’s performance of “The Man That Got Away” as one of the all-time great musical performances on celluloid, so I mean it as high praise when I say that while none of the numbers in this version surpasses that moment, some of them come shockingly close.

The film’s rightful concentration on its central couple, by necessity, takes focus away from its ensemble; if the trailer has you thinking Dave Chappelle plays a major character, expect otherwise. Still, Elliott carves out several powerful scenes, and casting directors Lindsay Graham and Mary Vernieu populate the screen with an interesting mix of scene-stealers like Greg Grunberg and Andrew Dice Clay, to say nothing of “RuPaul’s Drag Race” dropout Willam Belli, who has a great time flirting with Cooper in the drag-bar sequence.

I do wish the film’s final moments packed the gut-punch for which Cooper is so clearly aiming; the response from other audience members at the Venice press screening suggests I might be in the minority in thinking so. But in any event, “A Star Is Born” never shies away from big emotions or stirring romance, mixing old-Hollywood sweep with modern-day sophistication. Between Bradley Cooper (as a filmmaker) and Lady Gaga (as a big-screen lead), the title applies to both of them.