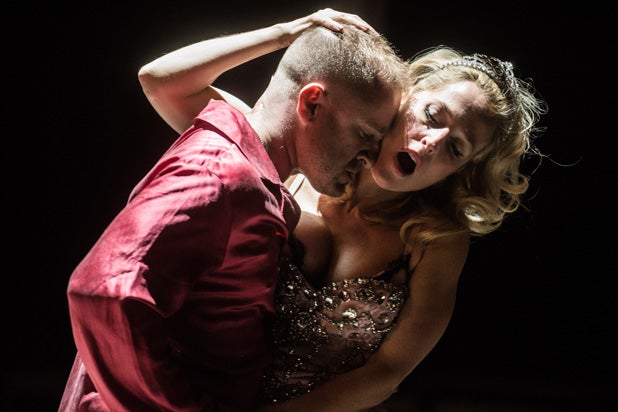 Let’s begin with what made the Young Vic’s production of “A Streetcar Named Desire,” directed by Benedict Andrews, noteworthy: its revolving stage, designed by Magda Willi, with the audience seated in the round.

That “Streetcar” crossed the Atlantic to open Sunday at St. Ann’s Warehouse in Brooklyn, and the concept is a near disaster. Critics are usually given the best seats, but from where I was sitting at eye level with the actors, I couldn’t see much of Blanche’s entrance due to the sink and dish washer blocking my view. I completely missed seeing Stanley’s big “Stella!” moment thanks to that same sink and dish washer.

Yes, the set revolves, which means that just when you’re getting involved in a scene something will come along to break your concentration, whether it is the shower curtain, the bathroom door, or Blanche’s imitation Louis Vuitton luggage.

Also Read: Tony Predictions: It's All About 'Hamilton' and Scott Rudin

After intermission, I retreated to an empty seat in the back row of the bleachers, which put me near the rafters. The experience was improved but not great. The best way to see Andrews’ revolving “Streetcar” is on HD, which is what I did last year at the Symphony Space. The production was recorded using multiple cameras, and tellingly, it’s edited so that whenever a kitchen appliance gets in your way or someone forgot to put down the toilet seat, the film cuts to another unobstructed viewpoint.

Regarding Andrews’s interpretation of “Streetcar,” let’s just say that the battle between Blanche and Stanley has been decided, and he’s the clear winner.

Shortly after the play opened in 1947, Thomas Hart Benton painted “The Poker Game,” which depicts the scene in which Blanche preens in the light behind the curtain while the men play cards.

To help gin up some publicity, Irene Selznick, the original producer, asked the cast to pose for a photograph replicating the painting. All actors agreed but one. Jessica Tandy refused because Benton’s painting saw the drama from Stanley’s viewpoint. She pointed to the masculine details in the painting, like the cigars and the smokestacks in the background, and the total absence of anything feminine, like lattice work or lace. Tennessee Williams ultimately took Tandy’s side in the controversy, and the photo was never shot.

In Andrews’ “Streetcar,” it’s not that Ben Foster plays Stanley as a total brute. The bigger problem is that Gillian Anderson plays Stanley’s idea of Blanche. In that “Poker Game” scene, Anderson doesn’t just let the light fall on her body. She undulates as if about to remove her panties and bra for the guys to get a better look.

Because she is a very talented actress, Anderson is always entertaining to watch. She mines the character’s considerable humor, but not with a scalpel. She uses a jackhammer. This is a woman who never heard of, much less read, Elizabeth Barrett Browning and Alexander Dumas. She doesn’t know the difference between della Robia blue and aquamarine. Minor tweaks have been made in the text so that it could be set in 2016. Andrews should have gone much further and turned Belle Reve into a high-end trailer park.

This is “Streetcar” devoid of jasmine perfume and white columns. In Blanche and Stanley’s first big showdown, over how Belle Reve was lost, Anderson is every bit Foster’s equal. But she fights on Stanley’s terms by being loud, strident, and coarse. Absent is Blanche’s charm, grace, and imagination. Again, it’s fun to watch, as if a very ballsy Dolly Parton were trying to prove she’s a serious actress but couldn’t resist wearing her favorite pair of metallic gold high heels. Anderson’s idea of illusion is all Maybelline and Aqua Net.

Anderson’s most effective, delicately drawn scenes are with her would-be suitor Mitch. Corey Johnson is excellent, conveying both sensitivity and a general lack of intelligence. His Mitch offers no escape for Blanche; the marriage would be over on the wedding night.

Blanche refers to Stanley as an ape. In interviews, Foster has spoken of watching tapes of the animals. Actually, he comes off more rooster or pig than monkey. Even though his portrayal is entirely unsympathetic, Foster makes perfect sense when he lambasts Dame Blanche’s arrogant behavior late in the play. Most of us wouldn’t put up with this woman as a house guest for five days, much less five months. As Stella, Vanessa Kirby presents far too secure a woman to live with such an animal, no matter how great the sex.

Foster doesn’t play the sex appeal. As magnificent as Marlon Brando is in the film version, he did bring a Harlequin romance subtext to the story: Blanche gets to be raped by the sexiest man alive. When Foster puts on his pajamas, you realize why Williams made them red. Rape is rape, and despite the total floozy heretofore presented by Anderson, the penultimate scene between her and Foster is harrowing.

In one respect, Andrews completely blows Foster’s interpretation of the role. After Stanley breaks all the plates at Blanche’s birthday dinner, he meticulously cleans up the mess he’s made with a broom and dustpan. Really?