“A Tale of Love and Darkness” seeks to blend serious political history and probing psychological analysis. The effort does not succeed, coming across disjointed and grim.

Adapted from Israeli author Amos Oz’s eponymous autobiographical novel and told in subtitled Hebrew, the film is well-intentioned but too superficial and self conscious to truly move the audience.

The directorial debut of Natalie Portman feels like a movie that left critical portions of its essential backstories on the cutting room floor, with only somberness to fill in the gaps.

Perhaps Portman meant to be oblique in her depiction of key characters, but the overall effect leaves the viewer uninvested in what should be a powerfully emotional tale. Or perhaps it was not the right marriage of material and filmmaker: Oz’s work is complex and multi-layered, but Portman’s treatment comes off as lackluster and unremittingly somber.

Set in Jerusalem just after World War II, in the first years of independent Israel (with flashbacks to a more affluent pre-war existence in Eastern Europe), the story revolves around Jews who escaped the Holocaust by moving to then-British-ruled Palestine. It’s told from the perspective of 10-year-old Amos (Amir Tessler) as he watches life, particularly as it affects his poetic and emotionally fragile mother Fania (Portman) and his bookish father Arieh (Gilad Kahana).

Also Read: Natalie Portman to Star in HBO Miniseries 'We Are All Completely Beside Ourselves' 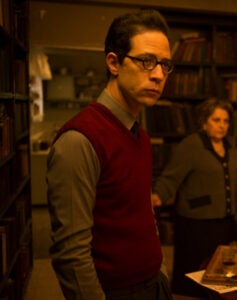 Fania dotes on her son, her every comment to him laden with portent. She speaks in parables and homilies in a way that never rings true. Every story she tells her son is meant as a lesson, making her seem like an unnaturally constant font of wisdom — until she no longer chooses to communicate.

Fania grew up in a wealthy family with lots of creature comforts, and her mother and sisters can’t fathom why she married the man she did — and frankly, neither can we. A passing comment from Arieh that Fania was desired by all the boys in their college makes her choice all the more bewildering. Fania herself seems mystified by her husband and their life of poverty. No explanation for why she chose such a reserved, odd and professionally unfulfilled man is ever given.

It seems a rather loveless marriage, but based on Portman’s telling, it’s hard to tell if that’s what triggers Fania’s long, drawn-out downward spiral. Perhaps it was the losses she experienced during the war, which are only hinted at, or the contrast of her life of luxury with the harsh realities of life in Jerusalem. Most likely, she suffers from severe clinical depression. Any or all of these elements could contribute to her withdrawal from family life, but the narrative keeps matters so restrained as to be murky.

In adapting Oz’s book, Portman’s biggest mistake may be putting the focus on her character rather than on the boy telling the story. Amos narrates, so it is ostensibly his tale to tell, but Portman makes it about Fania’s retreat into melancholia without giving us enough of a window into her mind or heart to make us feel the depth of her sadness. She is so enigmatic that she leaves viewers more confused than moved.

Kahana does a fine job in the supporting role of Amos’ nerdy father, but his role is even less well-developed than Fania’s; he seems to have just sprung up an intellectual middle-aged man, with a negligible past and little familial context. Overall, there’s an off-putting distance, an emotional remove that keeps the film from being compelling. Mostly we are struck with how dreary life is for everyone concerned.

“A Tale of Love and Darkness,” and the family it portrays, begins with promise, but as Fania grows more unhinged and remote, the film’s accessibility seems to fade as well. Amos is forced to step into the role of adult much too soon, but we don’t get a sense of how hard it must be for a child to watch his mother withdraw and become incapacitated with crippling sadness. He easily assumes the role of caregiver and is better at it than his scholarly father. The effect of a parent’s depression on a child offers plenty of drama and should merit exploring, but Portman inexplicably skirts the issue entirely.

Young Amos is not given much dialogue (the voiceover narration comes from the adult Amos), but what he does get to say sounds stilted and overwrought in the mouth of a child. Adult Amos, meanwhile, offers virtually no insight in his intermittent commentary. If this was an intentional choice on Portman’s part, it doesn’t work. Insight and introspection are lacking, and the audience feels disengaged because of these deficits.

The already sluggish pacing gets bogged down with occasional flashbacks and dream sequences before coming to a seemingly rushed conclusion that feels forced, rather than organic. At least the historical context is more intriguing than the family saga, perhaps because the plot is minimal. One of the more effective scenes takes place when a crowd gathers to hear the broadcast global vote which results in Israel becoming an independent state; the sense of promise and elation is palpable.

“A Tale of Love and Darkness” has a rich look and a well-defined sense of place. It’s a shame that Portman’s storytelling doesn’t dig deeper, and that the character she plays is given so much screen time yet so little depth.