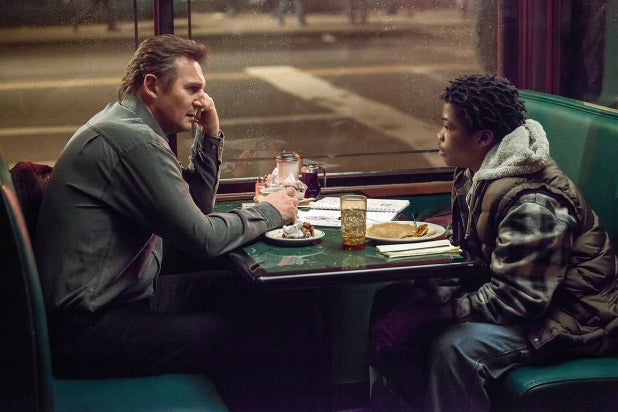 Early in the new Liam Neeson mystery-thriller “A Walk Among the Tombstones,” a man presents a woman with a choice. “Touch the one you want to keep,” he says, referring to her breasts, which he’s exposed and poked and ogled. Seconds later, we hear her scream as he takes a knife to her chest.

That scene just about sums up whether you’ll want to watch writer-director Scott Frank‘s lurid, ultra-grim procedural. “Tombstones” distinguishes itself not by its familiar yet satisfyingly plotted whodunit, but by its absorbingly macabre depiction of 1999 New York as a playground for cruel psychopaths who treat women’s bodies like toddlers treat construction paper.

The reluctant do-gooder trying to establish some law and order is unlicensed P.I. Matthew Scudder (Neeson), the protagonist of two dozen books by Lawrence Block. Neeson’s soulfulness is the only thing keeping this version of the former cop from falling into stereotype, since on paper he’s exactly the kind of anti-heroic brooder you’d expect: resourceful, haunted, seeking redemption.

Costumed like a dusty extra from the Coen Brothers’ “True Grit,” Scudder is consumed with just enough self-loathing after committing a gross misdeed years earlier to help drug trafficker Kenny (Dan Stevens, “Downton Abbey”) track down the kidnappers who abducted his wife, killed her, and desecrated her corpse for good measure.

Low on psychology but high on pulp, “Tombstones” tries to tap into some lizard part of the brain obsessed with calamity and doom. The killers’ inhuman viciousness — and the fact that the one guy who can do something about their murder spree is routinely thrown around like a sack of potatoes — is much scarier than the clumsy Y2K-anxious, pre-9/11 imagery, which portends that an even larger, more elusive enemy will strike soon. As nauseating as the film’s inventive sadisms can be, Frank succeeds far more in the details than in the larger picture that tries to relate this world to ours.

Fortunately, then, the latter half of the film focuses simply on plot after establishing mood, as Scudder trudges around a pre-gentrified Brooklyn to find a trail toward the killers, who careen between the robotically aloof and the clownishly grotesque. The game of cat-and-evil-mice grows to involve the abduction of the teenage daughter of another gangster. Her introduction in a fairy tale-like red hood while the killers leer to Donovan’s “Atlantis” comprise one of several erotically framed moments on which Frank then turns the table, leaving viewers both turned on and creeped out. If Frank is trying to say something with that, his message is unclear. It just left me wishing the girls and women in this world were allowed any other possibilities beyond kidnap and/or murder victims.

In a film as somber and violent as this one, a sense of humor is absolutely necessary. We’re grateful, then, for the brief appearances of Scudder’s kiddie sidekick T.J. (Brian “Astro” Bradley, of the upcoming “Red Band Society”), the tech-savvy homeless teen who fills in for Scudder’s lack of computer skills. With his precocious verbiage and smack talk about women, T.J. isn’t too far removed from an ’80s sitcom character — and the relationship between him and the gumshoe begins to resemble something out of “Diff’rent Strokes.”

But it’s hard not to pull for the character when he’s the only bright spot in the darkness. The “Tombstones” world is so cheerless and bleak we’d almost rather just spend an evening watching TV and ragging on Liam Neesons with him.