If you think man-crack is the apex of hilarity, “A Walk in the Woods” just might be the movie for you. It’s all right there in the trailers: slapstick, womp-womp one-liners, the premise of old buddies going on an adventure. See some moon or your money back!

So it’s surprising when the opening minutes show promise, thanks to an incredibly preserved Robert Redford, who plays accomplished travel writer Bill Bryson. Even more of a surprise is learning that this film is based on a memoir. While you’re viewing the film — and guessing at the next moment of hijinks — you imagine the studio had a lot of notes.

Either that, or the real Bryson has lived a sitcom life. After attending a funeral, Bill goes for a walk and is inspired to hike the Appalachian Trail, a trip on which concerned wife (Emma Thompson) insists that he take a friend. Both at the funeral and in the opening scene — Bill’s trying to survive a torturous television interview — Redford’s facial expressions and quips convey genuine wit and humor. He soon goes head-to-head with Nick Offerman‘s hiking gear salesman; another joke lands. Maybe this won’t be so bad.

Once Nick Nolte, as Bill’s college friend Stephen, shows up to join him on the hike, expectations plummet. Stephen is a cartoon: he talks as if his mouth were full of cotton; he limps off the plane and then tells Bill he needs to eat every hour or else he’ll get seizures. The beginning of their trip is a joke (but not the kind of joke this movie needs), with Katz huffing and puffing, barely able to walk, and needing to rest after a quarter-mile. 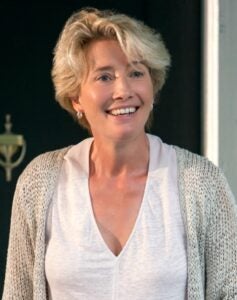 So where does director Ken Kwapis (“He’s Just Not That Into You”) and a trio of writers (one uncredited) take them from there? In last year’s Oscar-nominated “Wild,” flashbacks were effectively used to break up the protagonist’s hike on the Pacific Crest Trail. But “A Walk in the Woods” decides to go for — nay, strain for — antics. You can hear the brainstorming: What can we have happen to them? Bears, for one. Falling into a creek, definitely. Getting caught in snow and rainstorms. Umm … how about making a woman’s husband ragingly jealous of Katz?

Yes, Katz, who meets said woman in a laundromat while wearing garbage bags and looking like the red-faced aftermath into which Nolte can easily transform. She flirts first, of course.

Let’s talk about the woman’s size for a moment. She’s big. She’s really big. And that makes her a target for mockery, with Katz effectively saying he’s the only guy who’d want to sleep with her. Previously, Katz remarked that their waitress, another woman of size, was attractive. No insult followed, but it was meant to reflect the film’s notion that he’s got a profoundly skewed vision of the world. And Katz’s own fatness is mined for laughs: He’s on the top bunk, look out!

Needless to say, most of these moments — particularly the joke about how no one’s likely attracted to Laundromat Lady — are mean-spirited in a film that seems out for innocent goofs. If such details are in Bryson’s memoir, well, the guy’s a jerk. After that ugliness, “A Walk in the Woods” needed only one more pratfall to officially fail.

Redford’s Bill (whom Katz calls “Bryson”) at least comes off like a realistic person, and he still earns a laugh or two after the trek begins. But Katz is lazily drawn: all those vulnerabilities and impediments disappear after the yuks have been wrung out of them. He’s magically a real live man! And boy, is Nolte’s dialogue (here’s hoping it wasn’t improv) unnatural: When you’re with an old pal, do you use his or her name in every sentence? “Well, Bryson…” “The thing is, Bryson…” “Hey Bryson?” (as if anyone else is within hearing distance). Once you notice it, you can’t stop noticing it.

Even the wackiest comedies can’t be wacky all the time, though. And you can see this film’s big-picture lesson coming an Appalachian Trail away. Then again, that man-crack was telegraphed, too.