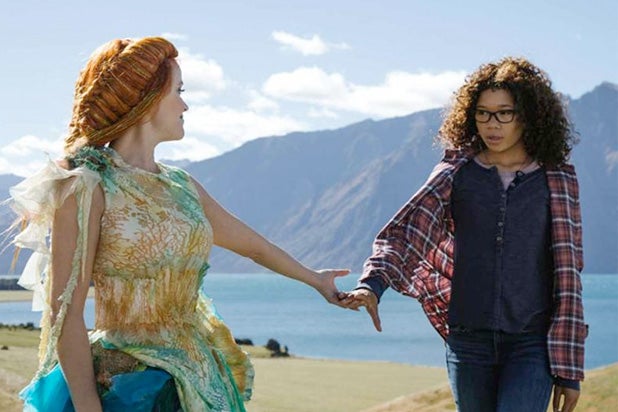 Awash in bold colors, bright patterns and ebullient kids, director Ava DuVernay’s new take on “A Wrinkle in Time” dazzles its way across time and space even if it doesn’t quite stick the landing. A psychedelic journey for 6-year-olds of all ages, this big-screen adaptation of Madeleine L’Engle’s classic novel offers trippy delights without defying the novel’s “unfilmable” reputation.

Still, DuVernay and screenwriters Jennifer Lee (“Frozen”) and John Stockwell (“Bridge to Terabithia”) give it their all, imbuing as much epic grandeur as they can into a story that seems to take place over the course of a languid afternoon. Audiences willing to forgive the script flaws in “The Wizard of Oz” — why doesn’t Glinda tell Dorothy right away that the slippers can take her home? — will be rewarded with an extravaganza of larger-than-life characters and mind-bending locations if they extend the same slack to “A Wrinkle in Time.”

It’s been four years since the disappearance of scientist Mr. Murry (Chris Pine), and his absence has been hardest on his tween daughter Meg (Storm Reid, “12 Years a Slave”), who’s been angry at the world and keeping everyone around her at arm’s length. One day her adopted brother Charles Wallace (Deric McCabe) lets in a stranger, Mrs. Whatsit (Reese Witherspoon), who informs Mrs. Murry (Gugu Mbatha-Raw) that Mr. Murry’s theories about dimension-spanning tesseracts were correct, and that she and the children will soon use those interstellar portals for an expedition that will bring him home.

Meg finds this all very strange, but soon their traveling party includes her classmate Calvin (Levi Miller, “Better Watch Out”), as well as Mrs. Who (Mindy Kaling) — who speaks only in quotations from poets, philosophers and the occasional hip-hop lyricist — and the powerful Mrs. Which (Oprah Winfrey), who guides the group across the universe to find Mr. Murry. But like “The Wizard of Oz,” “The Phantom Tollbooth” and any number of other kid-quest narratives, the real goal here is for the heroine to find herself; through these travails, Meg must learn to let go of her anger and to accept and love who she is, faults and all.

That’s a good place to start a story, and it’s certainly a treat to watch a movie where an intelligent, bespectacled girl saves the universe while a smitten boy looks on adoringly. Speaking of being a treat to watch, “A Wrinkle in Time” never holds back on the visual flair — costume designer Paco Delgado, cinematographer Tobias Schliessler, art directors David Lazan and Ken Turner, and set decorator Elizabeth Keenan (and their respective crews) clearly put in a lot of overtime to craft such a breathtaking bauble.

From the Murrys’ cozy home to worlds covered in sentient flowers to empty rooms that aren’t as bare as they seem, every location feels tangible, no matter how otherworldly. (And the flowing outfits worn by the trio of Missuses offer one surprise after another.)

Also Read: Ava DuVernay Worries Audiences May Not Like 'A Wrinkle in Time'

Where the film stalls is in a resolution that never quite seems to match the build-up. The final act feels like a multi-part miniseries that’s been cut down to a feature film, with a rushed climax that feels too differently paced from the building of the premise and its stakes. But none of this is a deal-breaker, and the production’s strengths far outweigh its flaws.

Apart from all the eye candy, we get an ensemble of charming performances: Reid’s determination and pluck make her a great heroine, and Kaling’s eyes always radiate with mischief, whether she’s keeping mum or repeating someone else’s words. With relatively little screen time, Pine and Mbatha-Raw express the kind of parental love that anchors the story, and the charismatic Miller imbues his sidekick role with genuine feeling.

Watch Video: Oprah's Reaction to Her 'Wrinkle in Time' Action Figure Is So Oprah

And, of course, there’s Oprah: I know I’m a bad American for being generally annoyed with her patented brand of you-can-do-it sermonizing, but when Mrs. Which offers support and inspiration to a wavering Meg, I got a lump in my throat. It’s not just any actress who can be taken seriously after her character enters as a 30-foot colossus, but Winfrey gives the movie — and its heroine — the juice to keep going.

“A Wrinkle in Time” is just weird and wonderful enough to generate a cult following, and it’s the kind of movie that the kids of 2018 are going to remember with genuine affection and wonder when they become the adults of 2035. (And how exciting to see a movie that makes science appealing to young audiences.) It’s an expensive art film for children — and that’s a good thing.