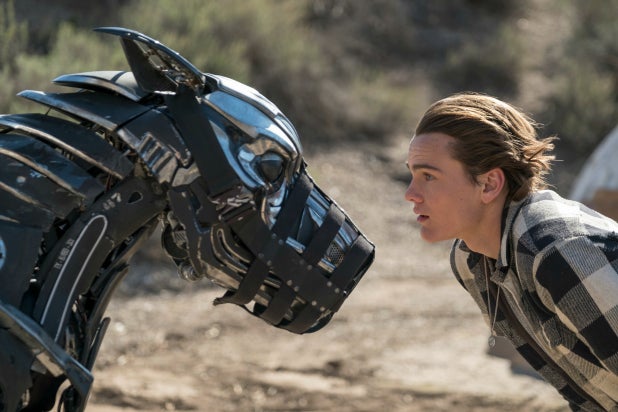 If you’ve ever wondered what would happen if you crossed Air Bud with a Terminator, you’re in the very specific target demographic for Oliver Daly’s “A-X-L.” It’s a family movie about a boy and his robot dog, in which the dog is a giant metal monstrosity with glowing red eyes, permanently bared razor-sharp teeth, buzzsaws in its mouth and a brow that’s been welded into the “angry” position. At one point, it punches through a car while trying to murder somebody.

To quote Norville Barnes in “The Hudsucker Proxy”: “You know … for kids!”

There’s a reason why this canine is a killer. “A-X-L” is about a top secret government experiment to create the perfect “war dog,” which can kill people, diffuse bombs, blow itself up, and for some reason do laser disco shows. (The movie never explains why that’s a feature, but it comes in handy on the human hero’s date nights.)

The dog escapes from the lab and befriends a teen dirt bike racer named Miles (Alex Neustaedter, “Colony”), who recently ran afoul of Sam (Alex MacNicoll, “Transparent”), a bully so inconsistently characterized that his first instinct is to help Miles when his bike chain breaks, but who eventually tries to kill him and leaves him for dead in the middle of nowhere, because reasons.

In the middle of nowhere is where Miles meets the dog, who he names “A-X-L” after the robot project’s acronym: “Attack, Exploration, Logistics.” After a scene where the dog charges after Miles on a dirt bike, in a sequence that pivots between terrifying and gnarly so often it’ll make your head spin, the dog decides to blow itself up and take Miles with it. But when Miles tries to befriend the dog, A-X-L decides to halt the countdown and becomes man’s best friend of mass destruction.

Meanwhile, the scientists who lost A-X-L spend half the movie watching these events unfold on a computer screen, doing not a danged thing because they want to see how it all pans out. They are, it must be said, lousy scientists. They apparently designed A-X-L to give out classified documents every time the dog encounters graffiti that looks vaguely like part of a military logo. Which feels more like a bug than a feature.

The plot kicks in (finally) when A-X-L permanently bonds with Miles, which makes the robot dog’s operating system inaccessible to anyone else, including the scientists who made him. And yes, that makes no sense whatsoever. Obviously, as a war dog, A-X-L’s human master could die at any time, so he’d need to be accessible without them.

Even the movie doesn’t seem to be on board with that premise. Later on, an evil scientist performs a manual override on A-X-L, and uses it to threaten Miles’s girlfriend Sara (Becky G, “Power Rangers”). Why does the scientist do this? Because he needs Miles’s help to perform a manual override on A-X-L. That’s a real plot point, and it’s maddening.

“A-X-L” wants to be an inspirational story about a boy bonding with a robot dog, and it’s hard to fault the movie for trying, because that’s a neat idea. But the only reason the filmmakers could imagine such a dog would exist is if it was created to kill people. And then they had serious trouble balancing the threat that A-X-L poses with the innocent wish-fulfillment of playing with a high-tech puppy. A-X-L may be a dog, but he’s designed to be a weapon, so he looks like nightmare fuel. And nightmare fuel usually isn’t the best centerpiece for a family-friendly flick.

Watch Video: Kimmel: Mike Pence Is 'For Sure a Westworld Robot' After Trump Water Bottle Incident

It doesn’t help that the film’s attempts to be contemporary and tubular feel dated and forced. The story bends over backwards to center itself around the hip world of dirt-bike racing, which takes a turn towards the laughable when Miles discovers in the climax that the evil scientists made evil dirt bikes, just in case a totally rad teenager would need to escape from their top-secret facility someday. And the film’s futile attempt to turn “Yo! Send it!” into a meaningful catchphrase makes “fetch” seem like it actually happened.

The cast is completely lost here, in a movie that sends them from one unrelated cliché to another, and asks them to simply go with it. Characters are introduced as benign but then sadistically try to murder A-X-L with a flamethrower. The robot dog is portrayed as heroic, but then acts like the car from “Christine” when the plot demands it. Thomas Jane plays a down-to-earth, supportive father who doesn’t seem to notice or care when his son goes missing for days, and then immediately believes a story about a high-tech robot dog based on hearsay.

“A-X-L” is a scrapyard of a motion picture, full of dented, leftover parts from other, sometimes only marginally better movies. No amount of hammering seems to get them all in place, let alone running. The results are pretty darned ruff.